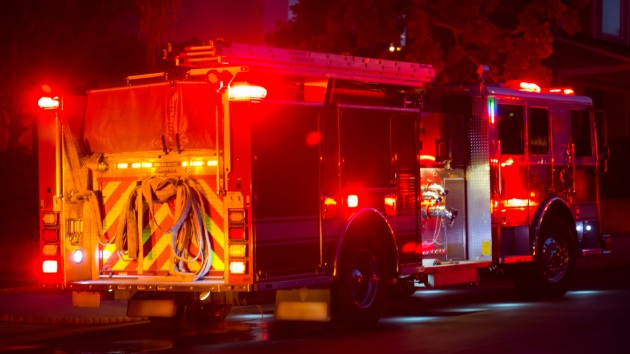 MattGush/iStock(WORCESTER, Mass.) — A Massachusetts firefighter and father of three died while rescuing members of his crew at the scene of a 4-alarm blaze overnight, officials said. The massive fire in Worcester, about 45 miles west of Boston, was reported just before 1 a.m. on Wednesday. Lt. Jason Menard, a member of the Worcester Fire Department since 2010, died rescuing the other members of his crew, officials said.Menard’s family had planned to be leaving for a trip to Disney, said Michael Papagni, president of the local firefighters’ union. “They’re now instead planning a hero’s send off,” Papagni told reporters Wednesday morning. Menard and the other firefighters were working to rescue a resident and baby when they became trapped by heavy fire conditions, Worcester Fire Chief Michael Lavoie said. Menard “heroically and selflessly saved his crew, helping a probationary firefighter to the stairs and then returning to rescue another trapped firefighter, assisting him out the window,” Lavoie said at a news conference. Fire conditions then overtook the third floor and Menard “was unable to escape,” Lavoie said.The high winds and brutally cold temperature made it difficult for the fallen lieutenant to be rescued, officials said. Three other firefighters were injured while battling the blaze. One remains in the hospital in serious but stable condition and the other two firefighters have been released. Menard leaves behind his wife, three children and parents, the department said. “He had a true passion for the job and he’ll be missed,” Papagni added.Copyright © 2019, ABC Audio. All rights reserved.