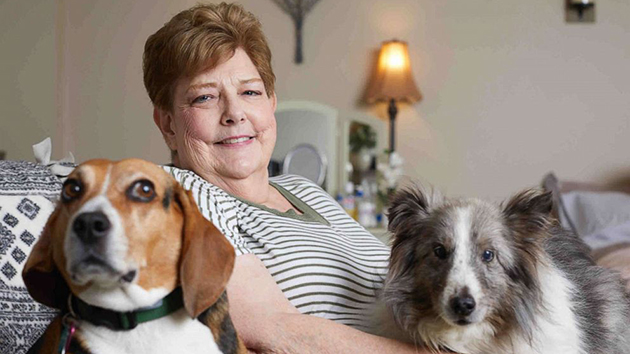 (Photo Credit: Melissa Akacha) Lynn Schutzman, a 70-year-old former pharmacist, was living out of a small SUV with her two dogs until two friends came across her car in a suburban Philadelphia store parking lot.(PHILADELPHIA) — It all started with two best friends who took to a neighborhood social media site to get more information about a stranger they’d noticed living in her car in a suburban Philadelphia store parking lot.”Does anyone know anything about the elderly woman with 2 dogs that has recently been living in her car under the covered part of the Target parking lot?” Jennifer Husband-Elsier asked on the Nextdoor app in April. “I spoke to the police and they said she’s been living like this for over 2 years in different areas of [King of Prussia]. … It’s an awful scenario. Really, really upsetting.”That post brought about a life change that Lynn Schutzman, a 70-year-old former pharmacist living out of a small SUV and battling multiple health issues, could never imagine.Schutzman and her two dogs now live in an apartment where she receives food deliveries and neighbors stop by to walk her dogs. For the first time in years, Schutzman has Thanksgiving dinner plans with Husband-Elsier’s family and others.”It’s incredible,” Schutzman told ABC News on Wednesday. “[The community] did a beautiful job. I mean, the apartment is just beautiful with personal touches. … I couldn’t believe it.”In that April post, Husband-Elsier told the app’s users that she wanted to do something about Schutzman’s predicament.Husband-Eisler said she and her friend Melissa Akacha approached Schutzman’s car.”Our first question to her was just, ‘Are you OK?"” Husband-Elsier said.Soon, the two women learned of her story: Schutzman had suffered from numerous illnesses following the sudden death of her husband, and that brought about a continuous mountain of medical bills, according to WBUR News.Schutzman soon found herself unable to pay for her home, so she moved all of her belongings and her two dogs into her SUV. She said she didn’t qualify for affordable housing and that homeless shelters would not allow her dogs.Because Akacha is a pharmacist, she asked people in the field whether they knew of Schutzman. Meanwhile, Akacha and Husband-Eisler paid for Schutzman to stay in a hotel. Akacha said she learned that Schutzman was a respected mentor in the pharmacy field.”Everybody knew that Lynn was a really wonderful, sweet, loving, giving person who really fell on hard times,” Husband-Elsier told ABC News. “That made us confident in our journey to start helping her.”After Husband-Elsier and Akacha each posted about Schutzman on the app to make residents aware, some people brought meals and blankets, and even food for her pets, to her vehicle in the Target parking lot.Husband-Elsier and Akacha, however, wanted to do more. So, they posted a crowdfunding page for Schutzman.”This woman has gone completely unnoticed…by absolutely everyone in our town for over two years! Up until today, she never wanted to admit to anyone, including her physicians, that she is homeless. She puts on a front to most people who know her because she is embarrassed [as you can imagine] of what has happened to her. … She is one of ‘King of Prussia’s homeless,"” Husband-Elsier and Akacha wrote in their posts. “We need to help this woman. NO ONE should ever have to live the way she is living.”Ten days later, they’d raised enough money online to get Schutzman a studio apartment. About a dozen neighbors also came to King of Prussia in May to help paint and furnish Schutzman’s new apartment with donated items before she finally moved in. Husband-Elsier and Akacha said there were various committees in charge of fixing Schutzman’s car, caring for her dogs and even getting her doctors.”Everyone wanted to be a part of this,” Akacha said.”I know that Lynn needed us. She needed friendship and love and people who care. … We learned that we needed Lynn, too. This opportunity has also given us love and friendship and restored our faith in humanity,” Husband-Elsier wrote in a post on NextDoor.In a video that captured Schutzman entering her new home, there wasn’t a dry eye in the room as she thanked everyone.”It was unbelievable the way our community came together,” Husband-Elsier said on Wednesday. “We just asked [Schutzman] if she was OK. Really, it’s the community who made the big impact.”As of Wednesday, the rent for that apartment had been paid off for the next two years and the crowdfunding page had raised more than $30,000.”It wouldn’t have happened without these angels,” Schutzman told ABC News. “I just want people to realize that this can happen to anybody. … I had a good job. I had good retirement but I got sick and health insurance only covers so much. … I have no children. I have no family. .. I had nowhere to turn. Sometimes, you know, just the kindness of strangers just makes all the difference in someone’s life.”Copyright © 2019, ABC Audio. All rights reserved.