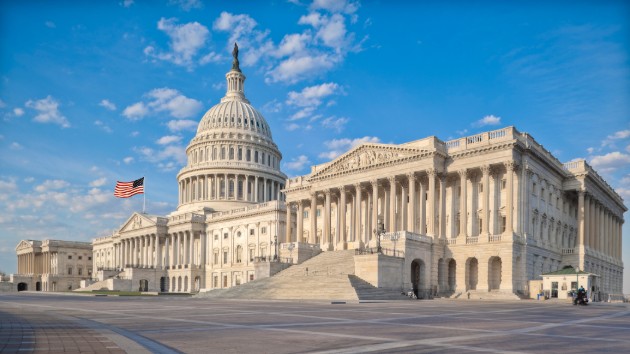 drnadig/iStock(WASHINGTON) — The House on Wednesday convened its first impeachment hearing in more than 20 years. Testifying was William Taylor, the top U.S. diplomat in Ukraine, and George Kent, the State Department’s top career official tasked with Ukraine policy. Here are the key takeaways: New details involving another Trump phone callMuch of Wednesday’s testimony recounted details already provided in closed-door depositions. But there was one new detail that raised fresh questions about the extent to which President Donald Trump was personally involved in the pressure campaign against Ukraine. According to Taylor, one of his staffers was in a restaurant in Kyiv with Gordon Sondland following a meeting with Ukraine President Volodymyr Zelenskiy when he overheard a call between Sondland and Trump, in which Trump asked Sondland the status of “the investigations.” Sondland is a close Trump ally and megadonor who is serving as U.S. ambassador to the European Union. The alleged phone call took place on July 26, one day after Trump’s phone call to Zelenskiy in which he asked Ukraine’s leader for an investigation involving Democrat Joe Biden.”The member of my staff could hear President Trump on the phone, asking Ambassador Sondland about ‘the investigations,"” Taylor said. “Ambassador Sondland told President Trump that the Ukrainians were ready to move forward.” Following that call with Trump, the staffer asked Sondland what the president thought about Ukraine, according to Taylor.

“Ambassador Sondland responded that President Trump cares more about the investigations of Biden,” which Trump’s personal lawyer Rudy Giuliani had been “pressing for,” Taylor said.It’s still a question as to when exactly Ukraine figured out military aid was frozen This is a key point for Republicans, who contend that Trump can’t be accused of personally imposing a “quid pro quo” in his July 25 phone call because, they say, Ukraine had no idea that military aid was on hold at that time. The hold was reported by Politico on Aug. 28, and Sondland has previously testified that he told Ukraine directly on Sept. 1 that security assistance was contingent upon its willingness to conduct an investigation.By that point though, the military assistance had been frozen for several weeks and aides within the Trump administration were scrambling to figure out why. Taylor testified on Wednesday that it was already clear to him by that point that a White House summit was contingent upon Ukraine’s willingness to agree to an investigation. Taylor said he personally didn’t hear from his Ukrainian counterparts expressing concern about the aid until after the Politico article published. Other witnesses testified in separate closed-door hearings that their Ukrainian counterparts had figured it out earlier than that. The State Department’s Catherine Croft couldn’t give an exact date the Ukrainians found out, other than it was “earlier than I expected them to.” “I think there’s still some question as to when they may have heard,” Taylor said.Dems say military aid to Ukraine was released 48 hours after whistleblower complaint given to Congress Rep. Adam Schiff, the Democratic chairman of the House Intelligence Committee, said military aid to Ukraine was released 48 hours after the White House learned that Congress was informed of a whistleblower complaint involving Trump. Schiff said his committee was informed on Sept. 9 by the intelligence community’s inspector general that a whistleblower complaint had been filed. At that point, the director of national intelligence hadn’t provided the complaint to Congress. “On Sept. 9, when the Inspector General informed Congress that that complaint had been withheld, the White House also learned that Congress now inevitably would learn about the complaint,” Schiff said. “It was less than 48 hours later that the military aid would be released.”Republicans contend there is no clear evidence that Trump personally forced a “quid pro quo” on Ukraine — $400 million in security assistance in exchange for launching an investigation that includes Democrat Joe Biden — because Ukraine eventually received the money without the public announcement the president wanted. Schiff’s comments suggest the money might have remained frozen, despite objections from Pentagon and State Department officials, had Congress not found out about the whistleblower complaint.

The witnesses played it straightSeasoned diplomats, Taylor and Kent have decades of experience walking a fine line when trying to make their point. So it’s probably no surprise that neither took the bait when Republicans or Democrats tried to drag them into politics.But there were some interesting moments, including when Ohio Republican Rep. Jim Jordan told Taylor he wasn’t much of a “star witness” because most of Taylor’s information was second-hand.Upon hearing this, Taylor responded, “I don’t consider myself a star witness,” and added, “I’m not here to take one side or the other.”Taylor and Kent also refused to comment when asked by Rep. John Ratcliffe, R-Texas, whether Trump’s July 25 phone call with Ukraine’s president constitutes an impeachable offense.”That is not what either of us are here to do,” Taylor said. “This is your job.”At one point, Democratic Rep. Joaquin Castro tried to make the point that Trump shouldn’t be let off the hook because military aid to Ukraine was eventually released by White House. Castro, D-Texas, asked the witnesses if attempted murder and robbery is a crime.”I think that’s right. I will go out on a limb and say yes, it is,” Taylor said, with a slight smile.Castro pressed, “Is attempted extortion a bribery or a crime?”Taylor answered, “I don’t know, sir.”Copyright © 2019, ABC Audio. All rights reserved.