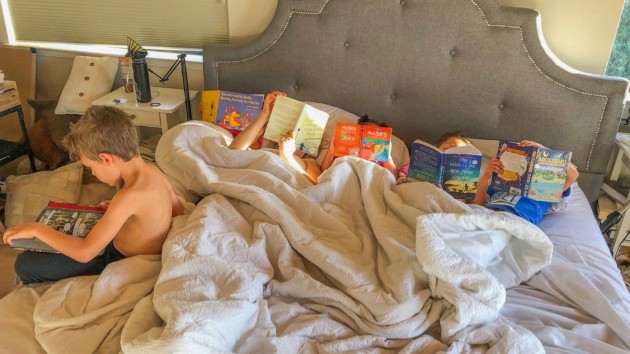 Molly DeFrank(FRESNO, Calif.) — When a Fresno, California, mom’s children were acting up, she, at first, wasn’t quite sure what was behind it.”Was it sugar or lack of sleep?” Molly DeFrank asked herself.DeFrank then notice they were particularly grumpy when it came time to turning off their screens. And then one day, it was the final straw.”I came home and the first thing my son said to me was ‘can I play on your phone?"” the mom of five told ABC News’ Good Morning America. “That was it.”Over dinner, DeFrank and her husband broke the news to their kids: There would be a 30-day ban on screens.That was nine months ago.”What started as a 30-day detox became a complete technology overhaul for our home,” she said. “I wish we had done it sooner.”The kids were initially upset by the news. But, they adjusted quickly, DeFrank said.They built more couch forts and played more LEGOs, she said. They fought less and read more.At first, DeFrank said, they looked to their parents for entertainment.

“I just thought about what I did during my childhood,” she told GMA. “I told them ‘go climb a tree or collect bugs. And if you’re still bored I have piles of laundry for you to fold."”The kids, ages 4 to 10, get along better and DeFrank said she’s been able to spot their interests.”My daughter is just reading non-stop,” she said. “And I found out my son loves non-fiction. I never knew that before.”Now, the family will gather to watch a movie once in awhile and the kids have one hour of screen time on Sundays.DeFrank said it’s something she and her husband are continuously evaluating. After all, she doesn’t believe technology is bad; far from it.”We just want to remain in a place where technology works for us,” DeFrank said. “And not the other way around.” Copyright © 2019, ABC Audio. All rights reserved.

New York City’s monkeypox vaccine rollout has had some issues. What went wrong?