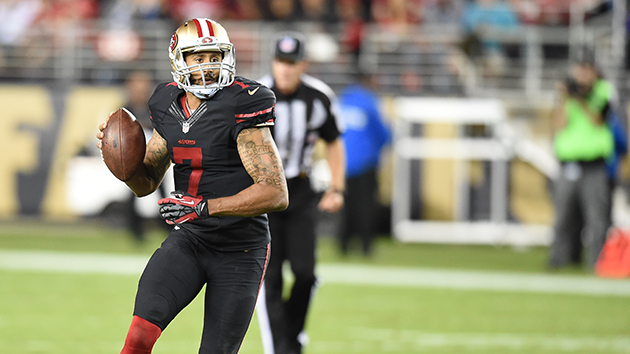 Photo by Scott Clarke / ESPN Images(ATLANTA) — NFL teams were informed on Tuesday that a private workout will be held this weekend for free agent quarterback Colin Kaepernick, but ESPN reports that Kaepernick and his agents had requested a different date for the event.According to a memo obtained by ESPN, the session will take place on Saturday in Atlanta, and will include both an on-field workout and an interview. All 32 teams are invited to attend.Kaepernick tweeted about the workout on Tuesday, saying that he is in shape and prepared to show teams what he can do. The 32-year-old Kaepernick hasn’t played in the NFL since 2016, the year he began kneeling during the national anthem to protest police brutality and racial injustice. ESPN says Kaepernick only found out about the workout on Tuesday morning, just hours before teams were told it would take place. Kaepernick’s representatives reportedly requested that the workout be held on a Tuesday, which would more easily allow NFL head coaches and general managers to attend.On Saturday, they point out, nearly half of the league will be traveling to their games this weekend. According to ESPN, Kaepernick’s team then asked whether the event could be held next Saturday, to give more teams time to determine whether to attend. The NFL declined and did not provide a reason.Miami Dolphins head coach Brian Flores, Detroit Lions head coach Matt Patricia and Atlanta Falcons head coach Dan Quinn all said Wednesday that they will have representatives at the workout. Copyright © 2019, ABC Audio. All rights reserved.