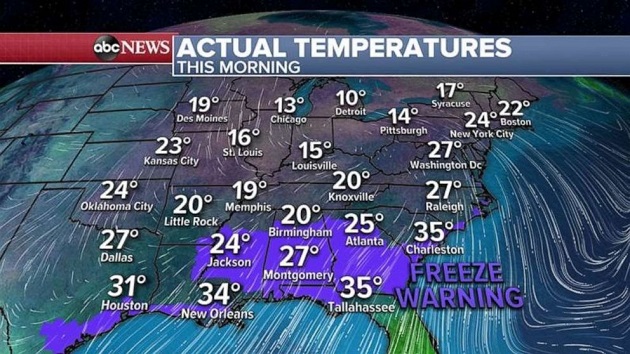 ABC News(NEW YORK) — An arctic blast is taking over a large swath of the country Wednesday, with brutally cold temperatures paralyzing the Midwest, the Northeast and even the deep south.The wind chill plummeted Wednesday morning to a bone-chilling 1 degree in Syracuse, 4 degrees in Boston and 8 degrees in Pittsburgh.Even the South was feeling the arctic blast, with wind chills falling to 17 degrees in Raleigh, 15 degrees in Knoxville and 21 degrees in Atlanta. Temperatures in parts of Louisiana and Mississippi on Wednesday morning were in the 20s and 30s — colder than any temperature recorded all of last winter.More than 300 record cold temperatures were reported in the last two days, including in Chicago, where the high of the day Tuesday was 17 degrees — the coldest high temperature ever recorded this early in the season.New York City and Philadelphia dropped to a frigid 23 degrees Wednesday morning, breaking daily records in both cities.

But the record-breaking deep freeze won’t last long. By Friday, temperatures will rebound to above freezing in Chicago and New York City will thaw to about 50 degrees.