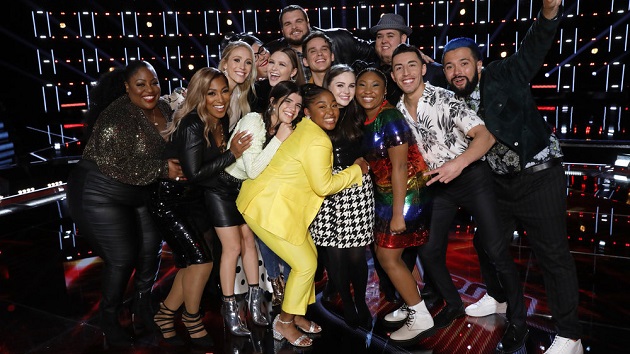 Trae Patton/NBC(NEW YORK)– On Tuesday night’s The Voice, Carson Daly revealed which three artists who performed on Monday from Blake Shelton, Kelly Clarkson, John Legend and Gwen Stefani’s teams would advance to the next round.  Two moved on based on America’s vote while the other would be chosen by his or her coach.

America sent Matt Boyle and Jake Hoot to the next round.  Kelly saved Shane Q.

For the first time, the 13th spot was determined by a “Wild Card Instant Save.” One of the two remaining artists from each team, based on who received the most votes from Monday, were given the chance to advance to the next round.  Viewers were then instructed to cast their votes for the artist they wanted to save.

Next, the remaining four artists sang their hearts out for America’s vote:

Hello Sunday advanced to the next round.

The Voice returns Monday night at 8 p.m. ET on NBC.