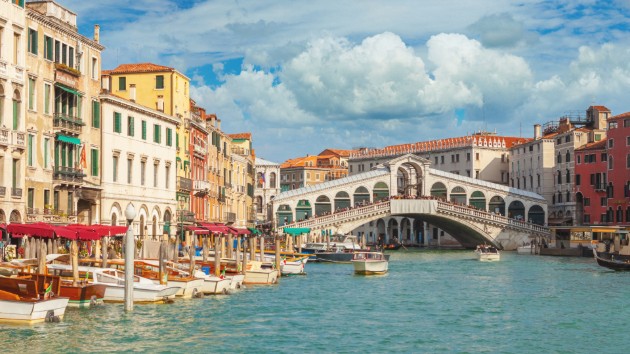 mammuth/iStock(ROME) — High tides and lashing rain struck Venice Tuesday night bringing the water level in some areas close to a 50-year record high and causing inestimable damage to the centuries-old city. Close to midnight Tuesday — at its night-time peak — the city recorded a high of 187 centimeters, just short of the famous 1966 flood when the tide reached 194 centimeters. Barges, boats and gondolas were stripped from their moorings as historic squares were submerged with water and restaurants, shops and hotel lobbies flooded. In a surreal scene, Italian TV showed a person swimming in St. Mark’s square Tuesday night as well as other bizarre images of water gushing out of toilets and electrical sockets in homes. As the waters receded Wednesday morning — with a peak of about 144 centimeters mid-morning — Venetian emergency services dealt with hundreds of emergency calls while some phone lines remained down and schools closed. Some tourists stood up to their knees in the water in St. Mark’s square taking selfies. The mayor who has been monitoring the flooding throughout the night said the situation was dramatic.

“Venice is on its knees. The Basilica of Saint Mark has suffered grave damage as has the whole city and the islands,’’ he tweeted. “We need everyone’s help to get through this day which is seriously testing us.”Italian news agency ANSA reported that a 78-year-old man was electrocuted by a short-circuit caused by the flooding of his home on the Venetian lagoon island of Pellestrina. The damage to the city and its precious art works and buildings is hard to estimate at this point but sea-water damage is known to be catastrophic for their preservation. An initial survey of the damage of St. Mark’s Basilica, which is in one of the lowest parts of the city, revealed the crypt with its famous mosaics totally submerged in water. Mayor Luigi Brugnaro blamed climate change for the flooding and said his council was asking for the government to declare “a state of emergency’’ for Venice.In a tweet he told local people and businesses to collect photographic and video evidence of the damage suffered for future claims for compensation.Flooding is not new to the romantic city built centuries ago in the Venetian Lagoon. High waters in Venice, known as “acqua alta,” periodically affect Venice and its surrounding islands during the fall to spring period when a combination of weather and tides raise the level of the sea water. The city monitors water levels attentively and customarily prepares for the high tides. Temporary walkways on platforms are placed in the historic squares and along canals to be used during the flooding, and buildings and shops set up barricades against the water ahead of its rise. A project to protect the city from acqua alta using floating gates was launched in 2003 but still remains incomplete following soaring costs and endless delays and scandals.The president of the region, Luca Zaia, told Italian Mediaset TV “We are faced with total, apocalyptic devastation.’’

He went onto say “I’m not exaggerating; 80% of the city is under water, the damage is unimaginable.” He attended a press conference in Marghera Wednesday morning with the mayor of Venice and Angelo Borelli, the head of Civil Protection, to request more aid for Venice. The prime minister is expected to visit Venice later Wednesday. Following the hottest October ever recorded in the world and the hot summer months, a wave of bad weather over the last week has brought much of Italy to a standstill with schools and subway stations closed in many cities. The torrential rains are moving off the mainland Wednesday with many regions left surveying the damage. Weather experts however are forecasting further storms and more heavy rainfall in the coming weeks. Copyright © 2019, ABC Audio. All rights reserved.

DC ballot initiative could decriminalize psychedelic plants, like magic mushrooms, in the city
Scarlett Johansson and Colin Jost have tied the knot
Brothers Peter and Benjamin Bratt explain the inclusive conversation they want to have with the rerelease of ‘Follow Me Home’
See Queen Elizabeth II and Margaret Thatcher face off in ‘The Crown’ season 4 trailer
Coronavirus live updates: Vaccine effectiveness will be known by December, Fauci says
Zeta latest: Three dead, massive power outages, delayed early voting in Georgia