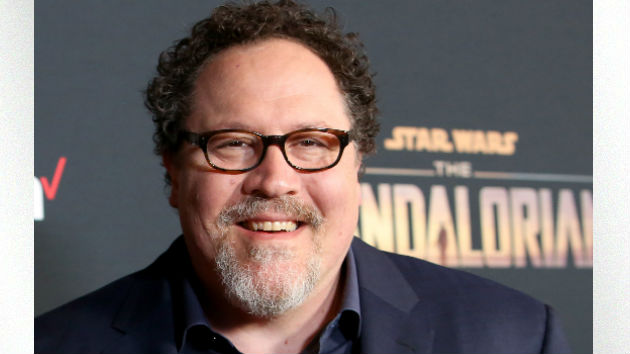 The first three episodes of the already-acclaimed show were screened at the event, which also attracted the show’s lead, Pedro Pascal, as well as co-stars Carl Weathers, Gina Carano, and Werner Herzog.

Also on hand were lots and lots of Star Wars fans. “I got to see, before anything, all of the fans,” Pascal said on the red carpet. “And it just makes me understand the beauty of creating something like this for people like them.”

He adds of the eight-episode show, “I think its heart is with the people that love Star Wars and love these stories. And so to manifest that so completely for people that love it is really beautiful…very inspiring.”

Favreau, thanks to his roles both behind and in front of the camera — he plays Happy Hogan in the Marvel Cinematic Universe — is no stranger to glitzy premieres. But this one was different, he noted. “The premiere is usually before the movie comes out. Now people have seen the first episode….[W]e already know what people’s reaction is. So this feels more like a party.”

He added, “You know, it’s fun on social media to see the reaction, but to actually see with a group of people, is really awesome.”

A similar three-episode screening was held in New York City Wednesday night — minus the red carpet.

On Friday, the second episode of The Mandalorian debuts on Disney+.

New York City election officials scramble to fix printing error on absentee ballots sent to voters
Trump, Biden compete for battleground Ohio ahead of first debate
Watch the chilling first trailer for ‘The Craft’ reboot, ‘The Craft: Legacy’
Statue of Black anti-slavery heroine to be erected in Paris garden
Get your first glimpse of Emma Corrin as Princess Diana on ‘The Crown’
Ilyasah Shabazz says ‘The Godfather of Harlem’ is “great,” but didn’t show the “depth” of her father Malcolm X