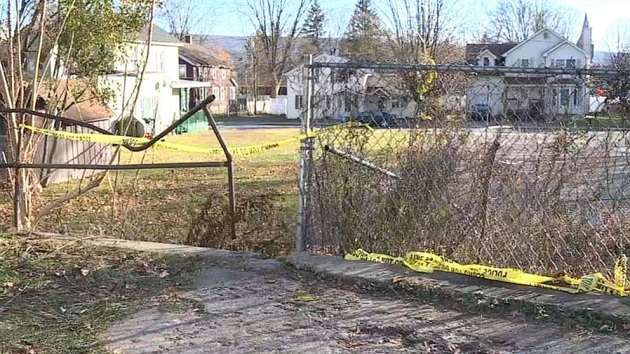 WABC-TV(NEW YORK) — A newborn with the umbilical cord still attached has been found dead, lying on the ground in a vacant lot, police said.The discovery was made Tuesday night in Port Jervis, New York, which is about 90 miles from New York City and near where Pennsylvania, New Jersey and New York intersect. At about 10:30 p.m., officers responded to a report of a dead infant in a vacant lot, according to the Port Jervis Police Department. The baby “appeared to have been born recently” and had its umbilical cord attached, said police.Authorities identified and interviewed the baby’s mother but her name has not been released because the investigation is ongoing, police said Wednesday.An autopsy was conducted on Wednesday and “detectives are awaiting results of toxicology and further testing,” said police.Police ask anyone with information to call the Port Jervis Police Department at 845-856-5101.The police department added that it asks “the public to keep the young infant in their thoughts and prayers.”Every state has Safe Surrender or Safe Haven laws, though they differ by state, including how much time after birth a parent or guardian has to surrender the child. In 32 states, parents or guardians have 30 days to relinquish the child, Damien Johnson, director of communications of the National Safe Haven Alliance, told ABC News last month.Laws also differ on which locations are considered safe havens. In every state, a hospital is a safe location. Some states also allow a child to be taken to a fire station or police station, said Johnson.The first Safe Haven law was enacted in Texas in 1999, and since then all states as well as Washington, D.C., and Puerto Rico have passed Safe Haven legislation, saving over 4,000 babies, according to the National Safe Haven Alliance. There is no federal legislation, Johnson said.You can reach the toll-free crisis hotline at 1-888-510-BABY or get information on your state by clicking the map here at nationalsafehavenalliance.org.Copyright © 2019, ABC Audio. All rights reserved.