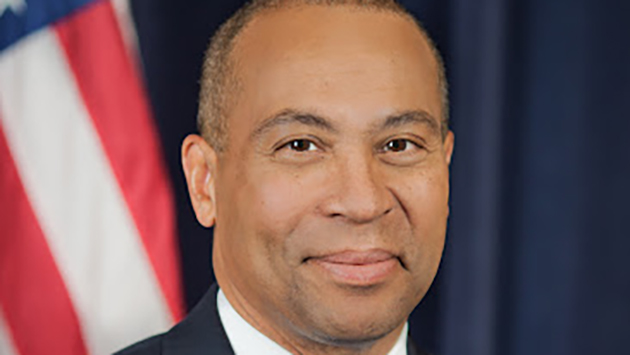 Office of the Governor of Massachusetts(NEW YORK) — Deval Patrick, the former two-term governor of Massachusetts and the state’s first black chief executive, formally announced a bid for the Democratic presidential nomination in a sharp reversal from his 2018 decision to not pursue a run — injecting more uncertainty into an unsettled primary less than three months before the first votes.”I’ve had the chance to live my American dream,” he said in announcement video Thursday morning. “But over the years I’ve seen the path to that dream closing off bit by bit. The anxiety and even anger that I saw in my neighbors on the South Side, the sense of the government and the economy were letting us down, were not longer about us is what folks feel all over America today in all kinds of communities.”I am today announcing my candidacy for president of the United States,” he added.Patrick, a close ally of former President Barack Obama, seeks to position himself as the candidate who can unify the party.His first move as a presidential candidate will be to personally file paperwork Thursday morning at New Hampshire’s State House for the first-in-the nation’s primary ballot — a day before the deadline — according to sources close to Patrick.He is expected to then head to California, the delegate-rich Super Tuesday state voting in early March, before heading to the other early states.Prior to his anticipated announcement, Patrick called political allies, officials and potential aides earlier this week to inform them of his intentions to launch an 11th-hour campaign for the nomination, according to Democratic Party sources, nearly a year after he ruled it out.”I hope to help in whatever way I can. It just won’t be as a candidate for president,” he wrote in 2018, as he signaled that his concerns with launching a White House run were with “the cruelty of our elections process.”Patrick’s late candidacy, 11 months into the primary, reflects a splintered field grappling with concerns over the strength of the existing pool of nearly two dozen contenders and underscores Democrats’ urgency to oust President Donald Trump.While four candidates steadily occupy the top spots in recent national and early state polling — moderates Joe Biden, the former vice president, and Pete Buttigieg, the mayor of South Bend, Ind., and progressive stalwarts, Massachusetts Sen. Elizabeth Warren and Vermont Sen. Bernie Sanders — the protracted contest remains fluid and without an outright front-runner.In the latest Iowa poll, only 28 percent of likely Democratic caucus-goers, the first voters in the country in early February, are firmly settled on their pick.Patrick, who hails from the same state as Warren — who said in interview last week that Patrick would top the list of potential members of her cabinet — could complicate the Democratic front-runner’s strategy in New Hampshire, a notion she denied after filing for the early state’s primary ballot Wednesday.While a shakeup to the presidential contest this late has seldom proved successful in recent history, Patrick argues in the video there is an opening for him.”I admire and respect the candidates in the Democratic field,” Patrick said. “They bring a richness of ideas and experience and a depth of character that makes me proud to be a Democrat. But if the character of the candidates is an issue in every election, this time it’s about the character of the country.”This time is about more than removing an unpopular and divisive leader — as important as that is — but about delivering instead for you,” he said, before recognizing the challenges ahead. “We will build as we climb … this won’t be easy.”But the newest entrant faces significant hurdles and long odds. While the other candidates have spent months aggressively campaigning, expanding their ground-games and amassing war chests, Patrick’s nascent campaign will need to quickly build up the infrastructure to compete and also raise cash even quicker.He will also have to contend with his ties to Bain Capital, the private equity firm where he holds the title of managing director and was co-founded by Utah Sen. Mitt Romney, in a cycle in which at least two of the front-runners are shunning big dollar fundraisers and the billionaire class.Despite his last-minute entry into the race, one source who has spoken to the former governor told ABC News Wednesday Patrick is clear-eyed about his prospects and has started to fill out a team — believing he can be competitive in neighboring New Hampshire, South Carolina, home to a significantly large African American voting population among the four early nominating states, and on Super Tuesday.Patrick has already missed the filing deadline in two southern states — Arkansas and Alabama — a potential disadvantage since those primaries are slated for March 3. Another hurdle lies in Michigan, where the deadline for parties to submit their list of candidates fell on Wednesday; he will now need to gather 11,345 signatures and petition to get on the ballot by Dec. 13.But Tim Murray, former Massachusetts lieutenant governor, who spoke with Patrick last year about a possible run but not about his plans this year, said his former boss had “a lot to offer” and was “not afraid of risk.””People will say, ‘If you’re going to make this decision, you should have made it already’ — but I think, he’s not afraid of risk. He’s not afraid to lose,” he said. “He thinks he has a vision that will offer value.”Patrick might not be the only late entry into the still-crowded primary. Former New York City Mayor Michael Bloomberg has moved closer to formally joining the crowded field, after filing to qualify for Alabama’s and Arkansas’ primaries over the last week to keep his options open as he weighs his own last-minute run amid concerns over the current field’s ability to defeat Trump.Bloomberg has also requested a petition from Tennessee’s secretary of state on Nov. 12 to gain access to the ballot ahead of the state’s filing deadline next month — signaling another step towards possibly declaring a bid as the field grows by one. Copyright © 2019, ABC Audio. All rights reserved.

For these Black activists, abortion isn’t just a woman’s issue. It’s about race, too