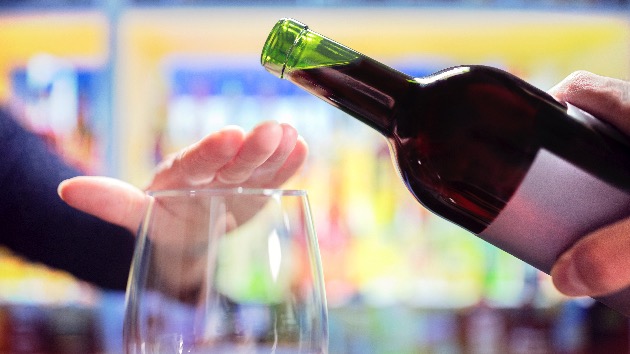 BrianAJackson/iStock(NEW YORK) — As the year winds to a close, a growing trend might make the tradition of Dry January more popular than ever: the rise of low- and no-alcohol beverages.The global nonalcoholic beverage market is expected to reach a record value of $1,650.28 billion by 2024, according to a recent report from Zion Market Research, while the consumption of alcohol around the world fell 1.6 percent in 2018, according to IWSR Drinks Market Analysis. Terms like “sober curious” are becoming more prevalent, and last month, Whole Foods declared that zero-proof drinks are one of the top-10 food trends for 2020.Influencing the rise of this trend is a cultural shift toward wellness.”As health and wellness are on the mind of the consumer, more and more things that are attached to it, such as low-alcohol and no-alcohol products and consumption, tend to rise with it,” Devon Bergman, CEO of Social Standards, a consumer analytics company, told ABC News.Even conversations on social media are shifting. Over the last two years, there has been an 85 percent increase in online discussions about low‑ and no‑alcohol drinking and a significant decrease in conversations about casual and heavy drinking occasions, according to Social Standards Consumer Analytics. Bergman said the consistent rise in consumer interest around low‑ and no‑alcohol beverages suggests the idea of moderation isn’t just a fad; it’s a trend.And big beverage companies are catching on.Laurent Grandet, lead analyst for food and beverages at Guggenheim Securities, said that significant players in the alcohol industry are expanding their low- and no-alcohol options as the light beer business is declining.This year, Heineken and Hoegaarden released nonalcoholic versions of their beer to the U.S., and this summer, Anheuser-Busch’s O’Doul’s brand refreshed its look, enlisting the help of three artists in LA, Chicago and New York City to design limited-edition cans that Fast Company called “pure Instagram bait.”Anheuser-Busch, who is the leader in the low- and no-alcohol beverage space, has even set a goal that at least 20% of their global beer volume will come from the products by 2025.”We know a growing number of consumers are taking interest in non- and low-alcohol products from brewers,” Adam Warrington, VP of corporate social responsibility at Anheuser-Busch, told ABC News, adding, “We are committed to meeting this growing demand.”Anheuser-Busch has also been investing more heavily in a message of moderation. Last year it launched a “Drink Wiser” campaign, encouraging consumers to be mindful drinkers and “Hydrate Between Buds.”They’ve put even more star power behind this year’s campaign with Lakers guard Danny Green, a two-time NBA champion, and Anthony Anderson, the Emmy-nominated actor and executive producer of ABC’s Black-ish.Anderson told ABC News that he wanted to be involved with the campaign because of the message.”My beliefs and the things that I feel we should be doing as far as the public … this ‘Drink Wiser’ campaign checked off all of the boxes, and I was just happy to be a part of it,” Anderson said.But the trend isn’t just changing how companies are targeting their consumers, it’s also shifting how consumers are socializing and it’s inspiring alcohol-free bars. The number of businesses selling mocktails or nonalcoholic cocktails in the U.S. has increased by 130 percent from October 2018 to October 2019, according to Square and the amount of money spent on Mocktails has increased 600 percent.”I think a lot of people want to drink less. … The concept was, what if we had that social aspect without alcohol?” Sam Thonis, co-owner of the alcohol-free bar Getaway, told ABC News.Thonis opened Getaway in Brooklyn, N.Y., this past April to bring a new type of experience to the neighborhood. The menu, which changes frequently, offers a variety of complex, mixed drinks all sans alcohol.”We’ve hit a tipping point where there are enough people who are reexamining this stuff, and now there’s some language around it, like ‘sober curious,’ but I think what’s really happening more than anything is that companies and alcohol brands have started trying to cater to that market,” Thonis said.Copyright © 2019, ABC Audio. All rights reserved.