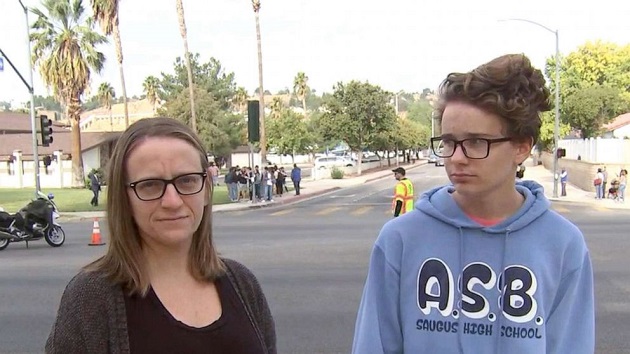 KABC-TV(LOS ANGELES) — Lisa Eichensehr said she always hated what she called the “new normal” of school shooting drills at her son’s high school in Southern California.”But I see why now,” she told ABC Los Angeles station KABC-TV.Eichensehr’s son Adam is a sophomore at Saugus High School, where a shooting took place Thursday and left at least two students dead and three others injured, according to officials.The suspect, a 16-year-old male, was taken into custody and is in the hospital in “grave condition” from a self-inflicted gunshot wound, authorities said.”We’re horrified. This is a great community. It’s too close to home,” Eichensehr said.One student, Brooklyn Moreno, said after hearing gunshots she “ran right out of school as fast as I could.”So many students were rushing out, she said, that people began to fall in front of one another.”There was girls falling in front of me,” Moreno said. “I was trying to help them up and then I just kept running because I didn’t want to get hurt either.”She said she has been “shaking and crying a lot. I’m an emotional wreck right now.”Amid the chaos, students were frantically texting parents to alert them about the shooting.Cari Wright got a text message from her daughter at 7:39 a.m. reading, “Hey mom i don’t know whats going on here at school but i love you and im so thankful for everything youve done for me. I love you so much.””I love you baby. Stay safe,” Wright responded, according to the texts obtained by KABC-TV. Wright’s daughter managed to safely exit the building.Two students said they didn’t feel entirely prepared for a shooting despite having had drills at the school — especially because the shooting happened before the school day and classes began.”The drills that we do are during classrooms, and you know like during class,” Lauren Former, a senior, told KABC-TV.A sophomore named Hannah echoed the point, saying drills happen when students and teachers are “calm.””But the thing is that when that happens, it will take a while for us to get calm,” Hannah said. “We need to be trained when we’re more terrified to get out of the school because you don’t think.