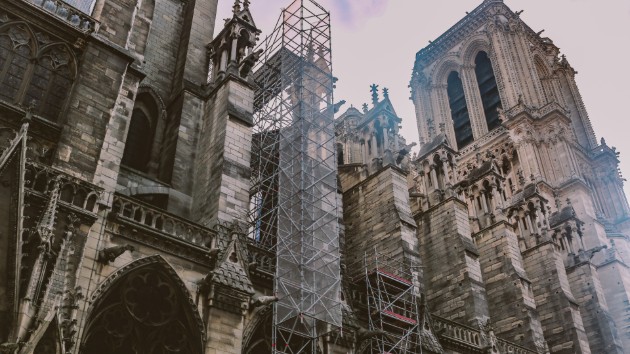 Erika Parfenova/iStock(PARIS) — The debate over the reconstruction of the Notre Dame Cathedral in Paris continues.Since the April fire that burnt down the roof of Paris’ most beloved cathedral, causing the collapse of the 800 year-old spire, debates on its reconstruction have opposed France’s conservatives and modernists.Emotions ran high Wednesday when Gen. Jean-Louis Georgelin, who was chosen by President Emmanuel Macron to lead the restoration, asked the chief architect of the project, Philippe Villeneuve, to “shut his trap” during a session of the National Assembly Committee.Villeneuve is in favor of building a spire identical to the one that was lost, which would also help keep to a tight deadline, he said, but Georgelin advocates for a consultation on the spire’s fate.Two days after the fire at Notre Dame, Prime Minister Edouard Philippe announced the organization of an international architectural contest for the spire’s reconstruction. Several projects for modern spires have already been conceived and published by artists and architects from all over the world.But for some, reconstructing Notre Dame is not up to competition but ought to be an enterprise faithful to the spire’s original look. Villeneuve, who has been the chief architect of the cathedral’s restoration since 2013, expressed this wish in the local newspaper Le Figaro.Georgelin, who was in front of French lawmakers to discuss progress of the operations, asked the architect that he “let us advance in wisdom so that we can calmly make the best choice for Notre Dame, for Paris, for the world.” The final decision should be made by “mid-2021,” Georgelin announced.The general expressed worries for the winter season, a “critical moment” for the scaffolding over Notre Dame’s roof, which is still in danger of collapsing under a strong wind. A team of steeplejacks has been working on taking down the scaffolding piece by piece, which should be achieved by early summer 2020.He also confirms to lawmakers the goal of five years set by Macron for the reconstruction, saying that “if there is no rigorous demonstration that it can be achieved in five years, there is however nothing to say that we cannot achieve it.”Copyright © 2019, ABC Audio. All rights reserved.