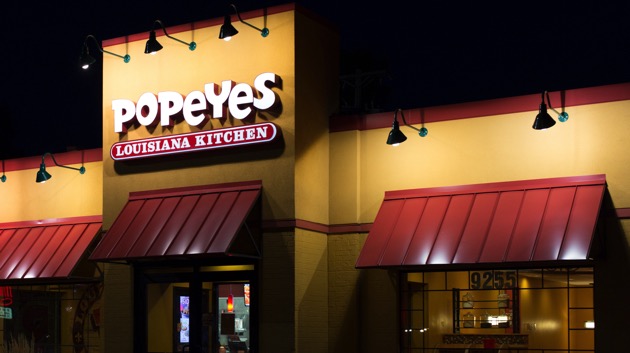 Wolterk/iStock(OXON HILL, Md.) — A Maryland man wanted in a fatal stabbing over a Popeyes chicken sandwich has been arrested, police said.Ricoh McClain, 30, of District Heights, Md., was located and taken into custody Wednesday night for murder and other charges, according to the Prince George’s County Police Department. No further details were immediately released.Police believe McClain is responsible for a stabbing that occurred on the evening of Nov. 4 at a Popeyes restaurant in Oxon Hill, Md., about 12 miles south of Washington, D.C.McClain allegedly got into a brief argument with another customer who had cut the line at the fast food spot while waiting to order the chicken sandwich, a popular menu item that returned to Popeyes nationwide this month. Agreeing to take the fight outside, the two men both got out of line and walked out the front door to the parking lot. McClain allegedly stabbed the other man immediately and then fled the scene, according to police.The victim — identified as 29-year-old Kevin Tyrell Davis of Oxon Hill, Maryland — suffered a single stab wound and was rushed to a local hospital, where he died soon after. There is no indication the pair knew each other prior to the confrontation, according to police.”Our homicide detectives are hard at work on this one, but we have been able to determine preliminary that this is related to the release of the sandwich here at this restaurant,” Prince George’s County police spokesperson Jennifer Donelan told reporters at a press conference that night.”For you to get that angry over anything,” she added, “and to develop into this type of violence, again, is a very sad and tragic day.”Investigators identified McClain after releasing surveillance images of him while he was still at large. A Prince George’s County police officer who saw the photos recognized McClain from previous run-ins. Investigators also received multiple tips from the community, police said.Police do not believe McClain acted in self defense and have charged him with first-degree and second-degree murder, first-degree and second-degree assault, as well as reckless endangerment.Following the man’s death, a Popeyes spokesperson told ABC News that the company was “very sad to hear about the tragedy.””We do not yet know whether this was the result of a dispute over one of our products or something unrelated, but there is no reason for someone to lose their life on a Monday night in a parking lot,” the spokesperson said in a statement. “Our thoughts are with the victim’s family and friends and we are fully cooperating with local authorities.” Copyright © 2019, ABC Audio. All rights reserved.