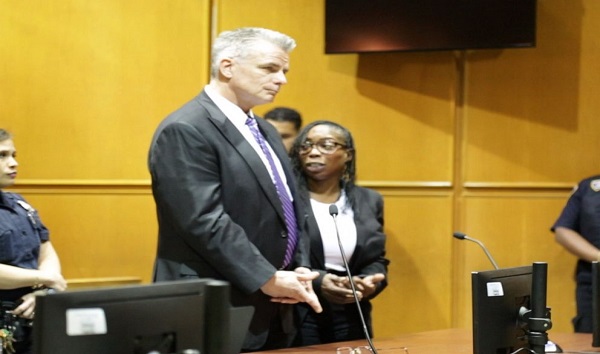 Christina Carrega/ABC News(SUITLAND, Md.) — A heartbroken Suitland, Maryland, family traveled to a New York City courtroom on Thursday to face the woman, who gave lethal butt injections to their loved one and legally “got away with murder.”Kelly Mayhew made an appointment with Donna Francis for May 30, 2015 to have a discounted buttock augmentation procedure done. The 34-year-old and her mother, Latrice Mayhew-Lane, made the five-hour trip to the basement of a home on Dickens Street in Far Rockaway that Francis, “an incompetent quack,” disguised as a “second-rate medical office,” said Acting Queens District Attorney John Ryan in a press release.Francis, 39 of London, England, had a massage table set up and was armed with dimethicone — a silicone-based gel — purchased from Ebay. Mayhew received the first injection of the clear fluid and as the second dosage was inserted, she “began showing signs of distress,” said Ryan.While holding Mayhew-Lane’s hand, Mayhew pleaded for her life as Francis refused to call for help, said Mayhew-Lane’s son, Richard Lane, as he read from a letter his mother wrote. The frantic mother said she called 911, but didn’t know the cross streets and Francis, again, refused to help. Instead, Francis left the mother and daughter in the house, got into a car and flew back to her home country.”Kelly’s last words to me were ‘Mommy, hold my hand,"” said Lane.Mayhew went into cardiac arrest and died at a nearby hospital.”She was a coward … and she had been a coward for the last three years fighting extradition back to this country,” said Assistant District Attorney George DeLuca-Farrugia in court on Thursday.The city’s medical examiner ruled her death a homicide as a result of systemic silicone embolism.Francis fought extradition to face the consequences of her actions for criminally negligent homicide that carries an upstate prison term of up to four years.”I’m not sure what information was given to the British courts or what they knew regarding the backstory. But one wonders, had this crime occurred in London, if they would have been content with a one year sentence for this action,” said Queens Supreme Court Justice Kenneth Holder to Francis.Stipulations of Francis’ agreed-upon extradition was a limited sentence of a year in jail and to not serve any of the time on Rikers Island.”I’m sorry, it was not my intention to hurt anyone,” cried Francis, who wore a navy-blue pant suit with yellow stiletto heels. “Sorry for all the years that this has been going on. I’m sorry, I’m sorry.””I have to say that the phrase getting away with murder certainly applies to you and to say that I’m not happy with this plea and sentence is an understatement,” said Holder to Francis who has been housed in Suffolk County.If the judge rejected the extradition conditions, the family may never see Francis brought to justice. The family — which filled one half of the Kew Gardens courtroom — would have to wait until Francis “makes a mistake” and travels to another country “that does not have same interest England has in dictating the terms of your extradition,” said Holder, adding, “… because what she (Mayhew-Lane) is not getting here, in my opinion, is justice.””She got away with murder,” said Mayhew-Lane outside of the courthouse as she wiped away tears and was consoled by her son, Richard Lane.In 2016, the American Society of Plastic Surgeons released a study that showed that between 2000 and 2015 deaths related to butt augmentations were up 252% — 4,767 in 2015, up from 1,356 in 2000. Prosecutors said it should be noted that when silicone is injected into a human body, it must be encapsulated to prevent free silicone from entering the bloodstream and causing an embolism.Copyright © 2019, ABC Radio. All rights reserved.