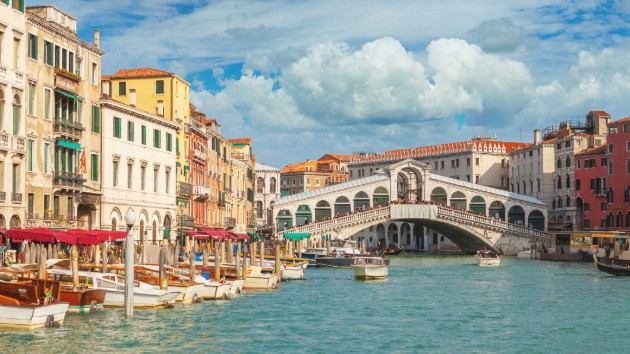 mammuth/iStock(ROME) — Italy’s government declared a state of emergency on Thursday after floodwaters ravaged Venice, causing inestimable damage to the centuries-old city.Twenty million euros (approximately $22 million, U.S.) is being set aside in response, reported Italian press agency ANSA. Venice saw its worst flood in 50 years on Tuesday, close to midnight, after floodwaters reached over 73 inches.As tourists posted selfies on social media with the flooded streets as backdrop, locals were left to deal with incalculable water damage to their businesses, homes and their city’s world-famous monuments.Italy’s Prime Minister Giuseppe Conte arrived in Venice on Wednesday evening to assess the flooding damage.Those affected by the flood can apply for 5,000 euros (about $5,500 U.S. dollars) in initial compensation, while business can get up to 20,000 euros (approximately $22,000 in U.S. dollars), the prime minster announced via a Facebook post on Thursday.Yet angry Venetian residents are demanding to know why such severe flooding even happened.In 2018, damage to the nearly 1,000-year-old St. Mark’s Basilica, was estimated to cost 2.2 million euros (about $2.4 million, U.S.) to repair.“The government is sympathetic and [at] present, no one will be alone,” the prime minister said on Twitter.”Venice is on its knees. The Basilica of Saint Mark has suffered grave damage as has the whole city and the islands,” he tweeted.Flooding in Venice is far from unusual, with parts of the city regularly underwater, especially between fall and spring when bad weather exacerbates the threat already posed by high tides.The frequency, however, has increased in recent years. In Venice, flooding has increased from about 10 cases in the first half of the 20th century, to over 40 cases in the second half and up to almost 60 cases in the last five years, according to the Mose website, Venice’s flood defense program under the Ministry of Infrastructure and Transport.“Extreme events are no longer remote probabilities, but mathematical certainties,” Mose wrote on its website. The cause: a combination of Venice sinking due to soil erosion and depletion of ground water as well as a rise in sea level.In 1966, following Venice’s worst flood in history, the Italian government asked engineers to draw up flood defense plans. The project began in 2003 and was due to be finished by 2011, but costs and corruption delayed the project.According to a Facebook post by Italian politican Andrea Zanoni, flooding occured minutes after several officials rejected “amendments to counter climate change.”Meanwhile, the schools in Venice have been closed, and locals have begun cleanup. Copyright © 2019, ABC Audio. All rights reserved.