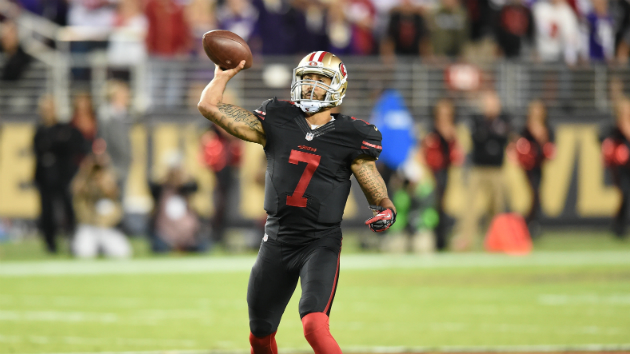 Photo by Scott Clarke / ESPN Images(ATLANTA) — Colin Kaepernick called an audible on Saturday, moving the time and location of his scheduled workout for representatives of more than 20 NFL teams, after the NFL refused to accommodate some of his requests.In a statement released by his representatives, Kaepernick said the new workout will be held at 4pm instead of 3pm, and will take place at a different location in Atlanta.”From the outset, Mr. Kaepernick requested a legitimate process and from the outset the NFL league office has not provided one,” the statement reads. “Most recently, the NFL has demanded that as a precondition to the workout, Mr. Kaepernick sign an unusual liability waiver that addresses employment-related issues and rejected the standard liability waiver from physical injury proposed by Mr. Kaepernick’s representatives.”The statement says that the NFL also rejected Kaepernick’s request to allow all media into the workout for the purpose of “transparency.”

In their response, the league said it is “disappointed” that Kaepernick didn’t appear for the scheduled event, saying he informed the NFL that of his plans at 2:30pm.

“Today’s session was designed to give Colin what he has consistently said he wants – an opportunity to show his football readiness and desire to return to the NFL,” the league said.

The NFL also notes that 25 teams were present for the league-sanctioned event. The league also said it agreed to allow Nike to shoot an advertisement featuring Kaepernick and mentioning the teams in attendance at the event, had allowed Kaepernick’s representatives to suggest interview questions, allowed Kaepernick to bring his own receivers for the workout, and gave Kaepernick’s team input on drills that he would run.

The league said, however, his new workout won’t affect his future in the NFL.

“Colin’s decision has no effect on his status in the League. He remains an unrestricted free agent eligible to sign with any club,” the NFL said in a statement.

After moving to the new venue, a high school about 60 miles away from an Atlanta Falcons facility, it was unclear how many scouts and teams were in attendance, according to ESPN’s Adam Schefter.

One NFL executive who was at the workout told ESPN’s Adam Schefter that Kaepernick’s arm talent was “elite,” and very similar to how it looked when Kaepernick was drafted.

After the workout, Kaepernick told reporters that he’s been ready for this opportunity for three years.”I’ve been denied for three years. We all know why I came out here, showed it today in front of everybody. We have nothing to hide,” he said. “So, we’re waiting for the 32 owners, 32 teams, Roger Goodell, all of them to stop running. Stop running from the truth. Stop running from the people.””My agent, Jeff Nalley, is ready to talk to any team,” Kaepernick added. “I [will] interview with any team at any time.”

Kaepernick thanked his supporters but did not take questions.

Kaepernick has not played in the NFL since 2016, the year he began kneeling during the national anthem to protest police violence and racial injustice.The 32-year-old quarterback has noted previous concerns about the way the workout was arranged. He claimed he was only informed that the league planned to hold the event on Tuesday, and when his representatives requested that the workout be scheduled for a day that would allow NFL executives and coaches to more easily attend, the league rejected that idea. He also said that the league refused to provide him with a list of team representatives who planned to attend.Copyright © 2019, ABC Audio. All rights reserved.