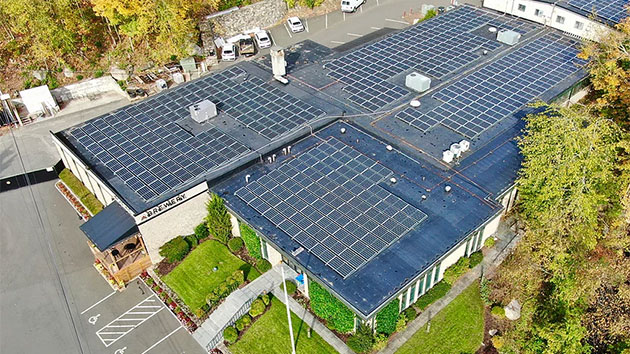 Started in 2017 by Rob and David Kaye, a father-son team, Nod Hill Brewery powers their equipment with a 287 kilowatt, 700 panel photovoltaic array on the roof of their building.

The array went online on April 4th and off-sets 100 percent of the brewery’s electrical usage, along with the usage of two other businesses in the building.

“One of the reasons that we wanted to do it from the beginning is because we actually brew on an electric system, which is somewhat unusual. It’s fully electric. We don’t use natural gas, steam power, propane or anything,” says co-founder David Kaye. “Usually electric brewing systems, they’re a little bit more uncommon. You find them in smaller breweries. We’re a ten barrel brewery, which is not enormous, but it’s on the larger side for an electric set up. That’s part of the reason that kind of got us thinking about that.”

When setting up the system Eversource, Connecticut’s energy provider, limited the array to a 287 kilowatt size based on the buildings past energy usage. This way Eversource would not be paying Nod Hill for a large amount’s of excess energy.

On lower usage days, the brewery sends excess energy back to the grid. In addition, there are times during the year that the brewery will have to pull energy from the grid, such as cloudy days and during the winter.

“Whatever we’re producing and [when] our consumption is kind of in the same area, then we aren’t sending anything back,” says Rob Kaye. “Sometimes we’re even taking as well. Certain times of the year we’ll be taking in some from the grid, but our footprint has gone down, our usage has gone down, probably about ninety percent from using the solar panels.”

Rob Kaye purchased the building where the brewery is located for another business he owns. When he and Rob decided to start the brewery they realized it was possible to put up solar panels based on the roof size and shape, along with the buildings past life as a manufacturer of airplane parts.

“We have an immense amount of electricity coming into this building and a lot of buildings do not have that,” says Rob Kaye. “Part of the idea in putting this brewery together, we wanted to be as green as possible. It had always been in our plan to go solar, we just didn’t know when and [what] the timing of what that would be.”

Surprisingly, the costs to set up it up were not overwhelming due to national and state solar programs.

“The government programs that are involved make this very, very worthwhile to do. There are tax credits, there are accelerated depreciation, there’s also in the state what’s called ZREC, in which we are paid by Eversource to have this,” says Rob Kaye. “And then the actual savings is really on top of all those things. When you start to add up all the costs of a tax credit, in monies paid over fifteen years, just on those alone it pays for this and that doesn’t include the actual cost savings of the electric.”

When the idea for the brewery came together the pair thought they would have a few years before it became a reality, but when they found out there were already 35 brewery applications ahead of them in the state they accelerated their time table.

Since opening in October of 2017, Nod Hill has brewed 70 beers, representing close to 25 different styles.

They produce the typical assortment of beers, including pale ales, IPA’s, and Belgian-style’s. Since they array has gone up, they have focused on brewing one style of beer based on its color.

“We’ve been doing a number of different German style lagers because, generally speaking, a lot of those styles of beer are more light and crisp and easy drinking,” says David Kaye. “We’ve kind of gone with a solar theme with a lot of the names, so we have a beer called Beam, which is our German pilsner, we have a beer called stellar rays, sun runner. It just gives us kind of fodder for coming up with creative names.”

They also advertise on all their cans and packaging that they are 100 percent solar powered.

Nod Hill Brewery was the first in Connecticut to go with 100 percent solar power, but there are several other breweries that use solar in the state, including Two Roads Brewing in Stratford, Kent Falls Brewery in Kent, and Brewport in Bridgeport.

Solar power is not just for small breweries, brewing giants like Heineken, Anheuser-Busch InBev and MillerCoors have also started bringing solar and other renewable power into their supply chain to become more sustainable.

Rob thinks solar power will become the industry norm in the coming years.

“I think anybody can benefit from it and I think you’ll see more and more people doing this because, even though we’re a little guy we do use a lot of electricity. Now think of that on a larger scale and their economies of scale can be much more than mine because, their usage will be much higher.”

As for the future of Nod Hill Brewery, Rob believes they may be able to go completely off the grid with batteries.

“I think the next step here is if they can bring the batteries down to a reasonable price, then we’ll be off and that I think would be huge. I think the technology is starting to come through. I don’t think it’s gonna happen tomorrow, but I think maybe 5-10 years from now that’s where we’ll all be. And that would even make us feel a lot better. We really don’t have to really use anything [non-green energy] at the end of the day.

The brewery has a page where you can see how much energy the system is bringing in and the environmental impact of the system.

3-row SUV market heats up as consumer demand soars: ‘There is no substitute’

For many American families a living wage is out of reach: Report

Why renewable energy is essential to curbing climate change