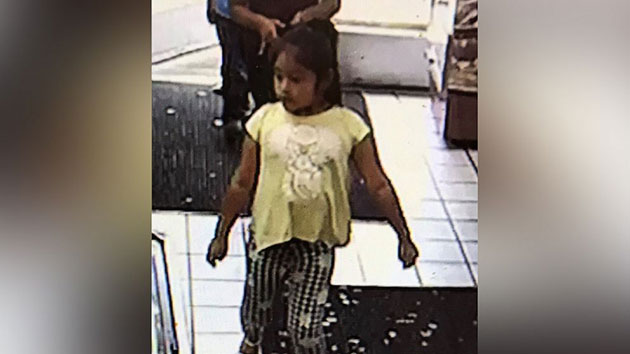 Brigeton Police Department(NEW YORK) — Saturday marks two months since a 5-year-old girl vanished from a New Jersey playground.Dulce Maria Alavez was last seen on Sept. 16 playing in a Bridgeton park with her little brother as her mother sat in a car nearby. Since then, the Bridgeton Police Department, the Cumberland County Prosecutor’s Office and the FBI have been investigating her disappearance, while the little girl’s family has led its own door-to-door search.A reward of $52,000 — from a mix of law enforcement and local businesses, among others — has been offered for any information.On the day she went missing, Dulce was playing with her 3-year-old brother at Bridgeton City Park in the afternoon while her mother, Noema Alavez Perez, sat in a car with an 8-year-old relative doing homework.At some point, the little boy returned to the vehicle, but without Dulce.An Amber Alert was issued that night, and authorities later asked for information about a man described as standing about 5-foot-6 inches tall and wearing orange sneakers, red pants and a black shirt. Police said he may have led Dulce from the playground to a red van with a sliding door and tinted windows.”She’s just an innocent girl. She’s just 5 years old. She doesn’t know nothing of the world that we know,” Perez said during a news conference on Sept. 30.On Oct. 15, investigators released a sketch of a possible witness who was allegedly at the park at the time Dulce went missing, but have yet to find that person.”We are asking the public to remain vigilant and report anything suspicious and/or sightings that may lead us to locating Dulce or those responsible for her disappearance,” prosecutors said in a media update on Friday. “No piece of information is too small or insignificant. It might be the piece needed to solve this matter … No further details of the investigation will be released as it remains an ongoing, active investigation.”Police are asking the public with any possible leads to contact Bridgeton Police Department at 856-451-0033.Copyright © 2019, ABC Audio. All rights reserved.