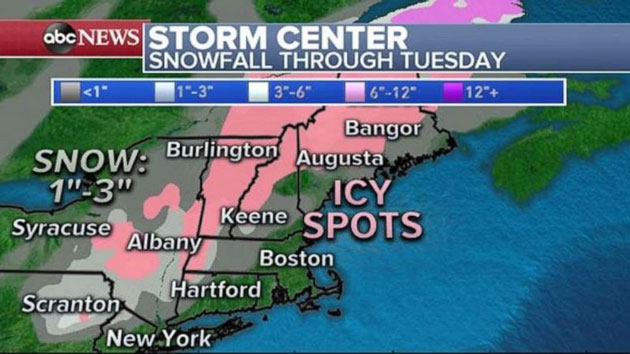 ABC News(NEW YORK) — A coastal storm continues to develop this morning just off the Carolinas’ coast line. Some of the outer bands of rain from the storm are just barely reaching the shoreline of North Carolina — especially in areas near Wilmington. This coastal storm is forecasted to move northward and parallel to the east coast of the U.S. Although the most significant impacts from this coastal storm will remain offshore, there are a couple of hazardous impacts expected along parts of the east coast of the U.S. through Monday.Rain will continue to occasionally impact parts of the North Carolina shoreline today, with locally gusty winds over 35 mph. Localized flooding will also be possible.Coastal Flood Alerts stretch from Florida to New England today and Monday and the intensifying storm could bring some coastal flooding from parts of Florida to the Carolinas during that period.As the storm moves northward, the northern side of the storm will have onshore winds and, likely, will bring some coastal flooding Sunday night into Monday for the Mid-Atlantic all the way to New England. In areas that are prone to inundation with the tide cycles, flooding could be notable — with moderate flooding expected in some areas.Also as the storm moves northward against a strong high pressure system, it will interact with some existing surface cold air in parts of the northeast. Additionally a weak trough approaching from the west should help draw some moisture onto land from the storm offshore.Unfortunately, this means there could be a couple of showers, perhaps some drizzle that makes it onto land in parts of Northeast on Sunday night through Monday. Although many computer models do not specifically indicate the risk for some freezing rain, it is possible that some of this rain will fall into a shallow layer of cold air at the surface.Additionally, if any of the rain becomes enhanced, the rain could provide some of its own cooler air. Therefore, this is a subtle risk for freezing rain and icy spots early Monday morning and perhaps again on Monday night. The risk for freezing rain should remain away from the coast, north and west of the cities, where temperatures tend to stay a little cooler.Snow will also be possible at times through some of the higher elevations of the Poconos, Catskills and perhaps the northern Appalachians. Some computer models are picking up on at least some icy spots in the interior northeast, but the risk could come closer into the western fringe of the major metro areas.It is important to note that many times, borderline, marginal icy situations catch people off guard and therefore can have notable impacts.Critical fire danger is also returning to Southern California today. High temperatures near 90 degrees, gusty dry Santa Ana winds up to 50 mph and relative humidity as low as 8% will cause any new or existing fire to spread rapidly.The good news is that this threat should only last through Sunday and part of Monday. South of Los Angeles, Tropical Depression Raymond is moving northward this morning and is losing its tropical characteristics.Over the next day or two, Raymond, and its associated moisture will interact with a separate low pressure system in the Pacific and begin to become a new entity that likely will move towards the southwest by Tuesday and Wednesday.The result is moisture that moves into parts of the Southwest in that time frame and there could be spots that could see 1 to 2 inches of rainfall. Some of this rain could make it into the Los Angeles and San Diego metro areas.Much of California is just beginning to run a little drier than average. However, the four corner region of the U.S. is running drought conditions, and therefore, much of this rain will be quite welcome.Copyright © 2019, ABC Audio. All rights reserved.