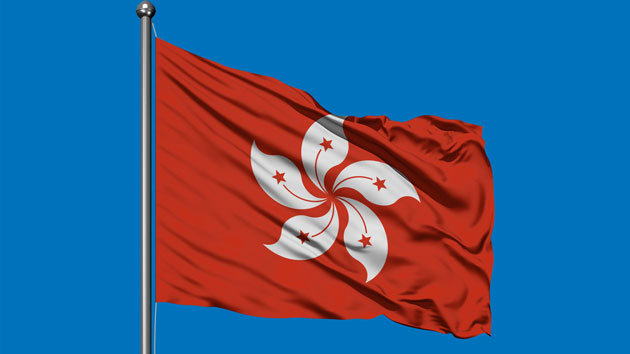 iStock(HONG KONG) — Protests in Hong Kong have intensified with live bullets and explosions as police seek to end the standoff at Polytechnic University.The police have surrounded the university in what is the one of the largest and most sustained battles in a protest movement that is now in it’s sixth month.An officer was shot through the leg with a bow and arrow and an armored police vehicle was set on fire as protesters fight back police tear gas and rubber bullets with Molotov cocktails.Police have been trying to disperse the protesters from the roads around Polytechnic, which is the last major university that is occupied by protesters.Live bullets have been fired towards protesters, but it is unclear how many have been injured in the conflict.Hundreds of protesters who refused to leave the university are making a last stand inside, anticipating mass arrests.The demonstrations began in early June when hundreds of thousands of mostly-young people marched against a proposed extradition bill that would have allowed suspected criminals in Hong Kong, a semi-autonomous Chinese territory, to be sent to mainland China for trial.Hong Kong’s embattled leader, Carrie Lam, has since withdrawn the bill, but widespread unrest has continued as demonstrators broaden their demands to include a call for direct elections for the city’s leaders, amnesty for protesters and an independent investigation into alleged police brutality.Protesters have four additional demands, calling for: the authorities stop calling the protests ‘riots’; amnesty for arrested protesters; an independent inquiry into police brutality; universal suffrage; the withdrawal of the extradition bill.Lam, the Hong Kong Chief Executive since 2017, has doubled down, saying that they will not give in to protesters’ demands.There have been lulls in the violence and intensity of the protest movement. But the death of a university student from a fall last week has reignited rage.The protesters blame police for the student’s injury because he fell off a parking garage in the vicinity of a police clearance operation.The escalation at Polytechnic University began earlier in the week, following a pitched struggle on Monday between police and protesters who had attacked toll booths and blocked the Cross Harbour Tunnel, one of three underwater tunnels in Hong Kong, which emerges on the island right beside the university. Police retaliated with tear gas.Thousands of students and protesters blocked entrances, torn up brick sidewalks for ammunition, and lined every vantage point with Molotov cocktails. The university’s swimming pool, emptied of water, has become a practice firing range. Some walked around with bows and arrows, many blunt training arrows, others sharpened or wrapped in gauze, ready to be lit on fire.Protesters withdrew to Polytechnic University, a Zaha Hadid-designed building, which normally serves 27,000 students, and started fortifying it.Polytechnic is one of five major universities being fortified by protesters. Masked protesters with makeshift weapons barricaded themselves inside the Chinese University of Hong Kong on Wednesday after violent clashes with riot police overnight.Students from mainland China have been evacuated with police help and the university has been closed for the rest of the year.Hong Kong lawmaker Ted Hui Chi-fung, who is a member of the Democratic Party, warned the movement won’t stop until the government fulfills protesters’ demands.    “This will not end,” he told ABC News in a brief interview on the street Wednesday. “This will go on forever. That’s my view.”Copyright © 2019, ABC Audio. All rights reserved.