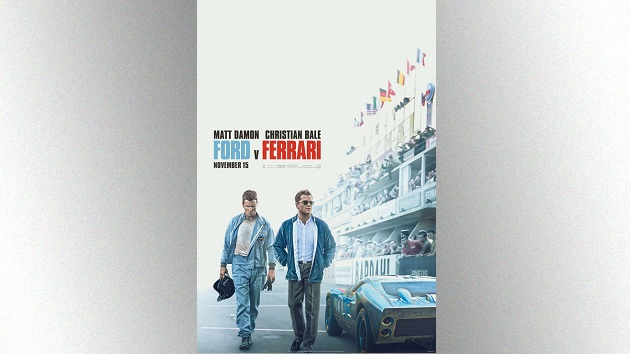 (c) 20th Cenury Fox(NEW YORK) — Ford v Ferrari topped the weekend box office and delivered an estimated $31 million in its opening weekend.  The film, based on the true story of engineer Carroll Shelby and race car driver Ken Miles, played respectively by Matt Damon and Christian Bale, who teamed up to build a car that could beat Ferrari for Ford Motor Company in 1966, was expected to debut with somewhere between $25-$30 million.

The latest Charlies Angels reboot, on the other hand, failed to take flight in its opening weekend.  The film, co-written and directed by Elizabeth Banks and starring Kristen Stewart, Naomi Scott and Ella Balinska, opened with an estimated $8.6 million, way below the $12-$13 million industry experts predicted.

Angels is currently in the hunt for second place with two other movies: Midway, which as of Sunday has earned an estimated $8.75 million in its second week, and the comedy Playing with Fire, with an estimated $8.55 million.

Rounding out the top five was the romantic comedy Last Christmas, collecting an estimated $6.7 in its second week of release.

Elsewhere, Joker became the fourth DC Comics adaptation to ever top $1 billion at the global box office and the first R-rated movie to ever reach that milestone.