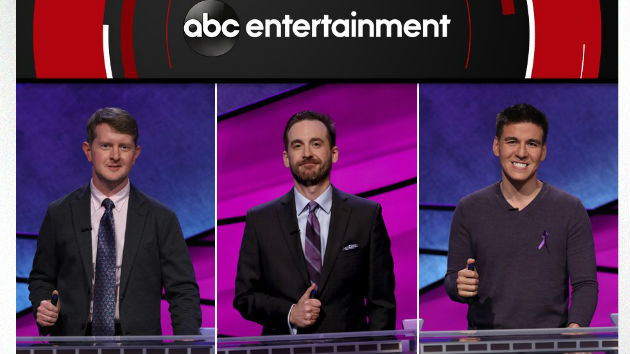 ©2019 Jeopardy Productions Inc. (LOS ANGELES) — Ken Jennings, Brad Rutter and James Holzhauer, the three biggest winners in the history of Jeopardy!, will face off against each other in a “primetime throwdown” in January on ABC.

Jeopardy! The Greatest of All Time will have the trio competing for a top prize of a million bucks; the first player to win three matches gets the top prize; the two runners up will grab a quarter of a million dollars each.

“Based on their previous performances, these three are already the ‘greatest,’ but you can’t help wondering: who is the best of the best?” said longtime host Alex Trebek.

Ken Jennings, for the record, holds the record for the longest winning streak in the history of Jeopardy!: 74 consecutive games, for a total take of $3,370,700.Rutter, however, is the highest money winner on Jeopardy! — indeed, on any TV game show — winning $4,688,436.Not to be outdone, Holzhauer holds 15 of the top single-day winnings records on Jeopardy!, and recently won the 2019 Tournament of Champions. His earnings total $2,712,216. Jeopardy! The Greatest of All Time kicks off Tuesday, January 7 at 8 p.m. Eastern on ABC and will air for three consecutive nights at the same time.  However, if no winner has won three matches by then, additional dates have been cleared in the 8:00 spot, from Friday, January 10 through Thursday, January 16.