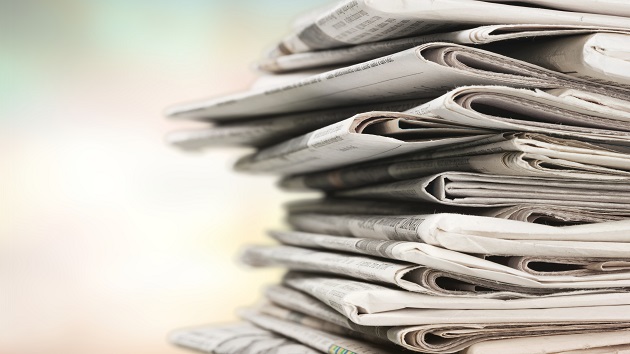 iStock/artisteer(NEW YORK) — A vast majority of Americans want access to local news, but only one in five people are willing to pay for it, a new report found.86% of Americans think that people should have access to local news, and 76% say they need local news organizations to stay informed, according to a report released Sunday by the Knight Foundation and Gallup. Moreover, 59% of people view their local newspaper as a symbol of pride, the report found.Just 20% of Americans, however, are willing to pay for it through subscriptions or donations to local news organizations, according to the report.”Americans see local news as the consummate public good — but they are deeply divided on how to address the financial challenges local news organizations face,” Sam Gill, the vice president for communities and impact at the John S. and James L. Knight Foundation, said in a statement announcing the findings.”It’s time to ask searching questions of ourselves as a society about how much we value local news, and what we’re prepared to do to ensure its future,” Gill added.While Americans are unwilling to pay for it, many also don’t think that governments should fund local news either — 66% oppose federal government subsidies and 60% oppose support from the local government for news organizations.Instead of public funding, the study found that most people want financial support for local news from residents, philanthropic organizations, tech companies and individual investors.”While the study’s results are sobering, the research did uncover potential solutions,” according to a statement announcing the study’s findings. “Educating the public on the benefits of local news for American democracy, and its current financial straits, increased Americans’ likelihood of financially supporting local news, the study found.”The decline of local news has been something the industry has been grappling with for years. In 2018, U.S. newspaper circulation reached its lowest level since 1940, the first year of record-keeping, according to Pew Research Center data released earlier this year. In addition, newsroom employment in the country dropped by 25% from 2008 to 2018.While digital ad revenue has grown, the Pew data found that a “majority goes to Facebook and Google rather than to publishers.”In October, tech giant Facebook announced it was launching a test run of its news service, confirming it will pay some publishers for content with the new feature and make an effort to showcase local news from publications in metro areas across the country. Facebook declined to say, however, who was getting paid and how much for content, according to The Associated Press. Copyright © 2019, ABC Audio. All rights reserved.