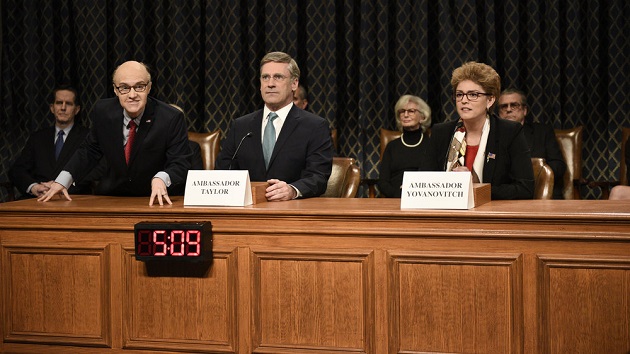 (Will Heath/NBCNEW YORK) –Jon Hamm showed up for Saturday Night Live’s cold open sketch, this weekend, which mocked the House public impeachment hearings, which, according to some pundits, lacked the “pizzazz” needed to capture the public’s attention.

SNL addressed the criticism by presenting the hearings as a soap opera, titled, “Days of Our Impeachment.”

After Strong’s Yovanovitch opens the hearings by saying she’s the victim of a “smear campaign” by President Donald Trump and his lawyer Rudy Giuliani that left her “publicly humiliated and without a job,” Day’s Jordan argues “this witness is clearly here because she loves attention.”

“Oh, yeah,” Strong’s Yovanovitch replies. “I love the glamour and the spotlight. That’s why I spent my career in Ukraine and Somalia.”

The hearings continue with a set of soap opera-like exchanges, punctuated by an audience member, played by SNL’s Heidi Gardner, continually fainting.

Later in the bit, Hamm’s Taylor interrupts the proceedings to drop the bombshell that there was a second phone conversation between Trump and Ukraininan President Volodymyr Zelensky, in addition to the July 25 call, in which Trump urged Zelensky to investigate Democrats and the Bidens.