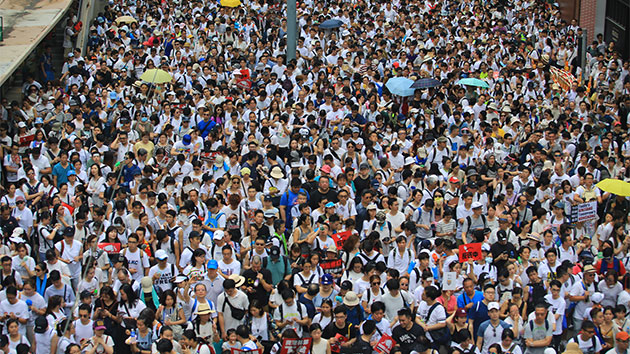 LewisTsePuiLung/iStock(HONG KONG) — Hong Kong’s Polytechnic University has become the front line of a fight between protesters and authorities. Violence broke out on Sunday and turned into a tense standoff on Monday. Since Sunday morning, Hong Kong’s police have attempted to disperse protesters from the occupied roads around PolyU, the last major university that’s occupied and fortified by protesters.This is one of the largest and most sustained battles in this protest movement, now in its sixth month.An armored police truck was set on fire and an officer was shot through the leg with a bow and arrow. The police discharged rounds of rubber bullets and unleashed water cannons. Protesters responded with bricks and Molotov cocktails.“If rioters keep doing what they do, police will have no choice and will fight back with tear gas and real bullets,” police warned after firing off rounds of live bullets on Sunday evening. Tear gas enshrouded the scene.In a dramatic moment, a footbridge leading to the campus caught fire. Molotov cocktails which had been placed on the bridge also caught fire, leading to many minor explosions. The entrance to the university was left smoldering.In a dramatic moment, a footbridge leading to the campus caught fire. Molotov cocktails which had been placed on the bridge also caught fire, leading to many minor explosions. The entrance to the university was left smoldering.But the morale is changing among this core of committed protesters as they run out of supplies.“The police have surrounded the whole campus, there’s absolutely no way out,” one protester told ABC News. “The situation is out of control,” he said.“We don’t have any more supplies, so once we run out of water and food we’re going to die.”Among the protestors inside the university are over 100 trapped high schoolers. Parents have joined a sit-in, begging police to let their children leave the university, while around 20 head teachers asked authorities to allow them to go in to escort the children out. But the requests have not led anywhere. The authorities have said they’ll arrest everyone inside the college — in some cases, protesters elsewhere are trying to draw the police away so those inside the university may have a chance to escape.How long will the students be able to hang on is a vital question given that supply lines have been cut. “I don’t think anyone on the campus knows what they want to do, what they should do,” said the protester to ABC News. “We obviously need help from outside. But I don’t know who we’re going to get that help from.”U.S. Secretary of State Mike Pompeo, speaking during a Q&A at Rice University, said that the U.S., the U.K. and “several dozen countries” have “all made clear” to China “our expectation of how China will behave” and called on General Secretary Xi to honor the commitment to “one country, two systems” — a framework that, in theory, allows Hong Kong semi-autonomy.“The UK is seriously concerned by the escalation in violence from both the protesters and the authorities around Hong Kong university campuses. It is vital that those who are injured are able to receive appropriate medical treatment, and that safe passage is made available for all those who wish to leave the area. We need to see an end to the violence, and for all sides to engage in meaningful political dialogue ahead of the district council elections on Sunday,” read a statement from the U.K. foriegn office, condemning the violence.Patrick Nip Tak-kuen, Hong Kong’s constitutional and mainland affairs secretary, said that the protests this weekend have reduced the chance of Hong Kong’s district council elections going ahead on Sunday, Nov. 24, according to local English-language newspaper rthk.hk.As the siege continues into a second night, several hundred protesters have gathered with signs, hoping to pressure the police to let the protesters in the university leave.Hardcore protesters have been joined by ordinary citizens. They are chanting “save the students,” and they are angry. Copyright © 2019, ABC Audio. All rights reserved.

Russia-Ukraine live updates: Ukraine fighting for ‘every meter’ of Severodonetsk