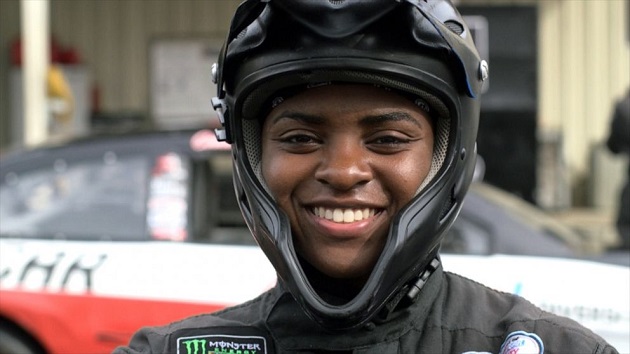 Janet Weinstein/ABC News(CHARLOTTE, N.C.) — The sound of drills is deafening, but the careful choreography of hurried tire-changing puts everyone on the track into their own quiet Zen.”My heart’s like: ‘Boom boom, boom boom,” NASCAR rear-tire changer, Brehanna Daniels, told ABC News. “If there is a wheel rolling down pit road, that it’ll be my fault, and I’m fired.” Once practice ends, Daniels and her team members whip off their helmets to talk, a motion that quietly reveals that she’s the only woman in the pit.“Anything a guy can do, we can do — probably do a little better too!” she joked.“I’m never complacent,” she added. “I’m going to keep doing whatever I can to be great.”And “great” she already is. In 2019, Daniels became one of the first women in NASCAR history to pit at the Daytona 500. She is also the first African American female pit crew member to compete at a national series.“I’m doing something that’s not just for myself but it’s much bigger than me,” she said. “I’d like to see NASCAR as multiple faces and not just one.”Daniels said she never initially set out to get into the race car game. She played basketball for Norfolk State University on a full scholarship and had no interest in NASCAR until she heard there were tryouts on campus.“Something told me, like, you have to go to this NASCAR trial,” she remembered. “It was like God told me, like: ‘Brianna you have to do this.’”She said she was the only woman to try out in the trial, which eventually led her to a spot on NASCAR’s “Drive for Diversity” program.“They were specifically recruiting athletes,” she remembered. Considering how heavy the tires are and how valuable speed is, athletic conditioning is key. Tires can range between 65-75 pounds.In stark contrast to the intensity of her daily job, every night Daniels sinks quietly into her journals. She has been journaling every day since she was a little girl. She has over a dozen journals stacked up, all different colors, sizes and shapes, all filled with life-altering moments as well as mundane middle school gossip. She smiles as she flips through one, remembering her first college basketball game.“Journaling is very therapeutic to me — like we have best friends that we can talk to, you know, talk to about stuff that’s gone on our lives. But you don’t always tell them every single thing,” she says. “It’s like everything’s bottled up inside. I’m slowly releasing it as I’m writing it down on paper.”She credits her mom for getting her into writing — a routine that grew more important to Daniels after losing her mother to breast cancer when she was 14 years old.“She was a real trooper, you know,” she said. “She was like Superwoman to me.”Back at the pit, Daniels joked around with the other male team members, even lightly punching one in the arms as they run laps.“She’s basically one of the guys out here,” said NASCAR tire carrier and teammate, Ernesto Holden. “We treat her the same way we treat the other guys.”But for Daniels, she said she strives for more.“I always thought that name looked good on TV,” Daniels said with a smile. “One day everybody will know who Brehanna Daniels is.”