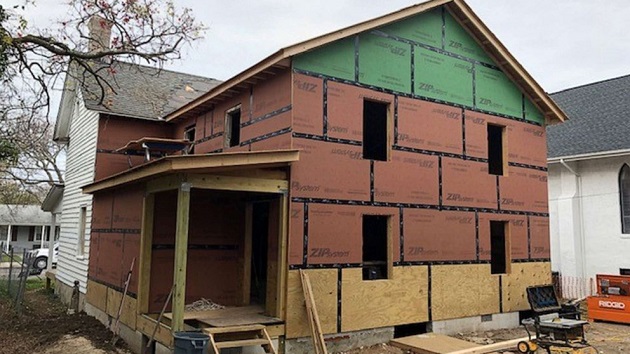 Courtesy Zack Mullock(CAPE MAY, N.J.) — Harriet Tubman will be honored with a new museum dedicated to preserving her life and history next year in New Jersey.The Harriet Tubman Museum will be located next to the historic Macedonia Baptist Church, which is in Cape May, a New Jersey town where the abolitionist worked for some time. Tubman earned money by working in hotels and for families as a cook in Cape May, according to a historical account.The local community has raised nearly $160,000 of the $500,000 needed for the exhibit to open.Zack Mullock, a Cape May city councilman who is managing the museum’s construction, told ABC News that most fundraising efforts have gone toward materials for the building. His family has contributed both their time and finances to the project and hope to preserve “a major part of history that has disappeared.”He also said that although he has visited similar museums in Maryland, what separates this museum from the others are the artifacts.On display will be unique Underground Railroad items and African American art, including a collection of several modern pieces from the late Rev. Robert Davis, the longtime pastor of Macedonia Baptist who died in 2015.Mullock said that his family is also in contact with the team behind the movie Harriet, a feature film about the abolitionist released earlier this month, for a showing of the movie at the museum’s grand opening on June 19, 2020. That day was chosen because it is believed to be Tubman’s 200th birthday and June 19th is also “Juneteenth” — a holiday commemorating the end of slavery.Eugene Dempsey, an 82-year-old retired maintenance technician, said he’s most excited about the museum as “a place for the kids to extend their learning” about Tubman.”There’s so much black history … it’s unbelievable,” said Dempsey, an Air Force veteran who’s lived in Cape May for over six decades with his wife, Emily. “There’s just the history of the background of Harriet Tubman. What she did was amazing … what she did as a woman … it’s just a wonderful thing.”Another notable African American historical building in Cape May is The Franklin Street School, which is located blocks from the future museum’s site, and previously served as a school to educate black children during segregation, according to The Press of Atlantic City. Built in 1927, Dempsey said his wife, her sisters and their mother attended the school.Tubman, a noted abolitionist and celebrated Civil War spy, was born into slavery on a Maryland plantation in 1822 as Araminta Ross and changed her name after marrying her first husband. She escaped slavery in 1849, and, as a key figure in the Underground Railroad — a diverse network of escaped slaves, free blacks and abolitionists who provided safe housing and secret transportation routes to the North — returned to the South more than a dozen times to help free others.During the Civil War she was a nurse and a spy for the Union Army. After the war, she petitioned the government to have her widow’s pension increased given her additional wartime service.Copyright © 2019, ABC Audio. All rights reserved.