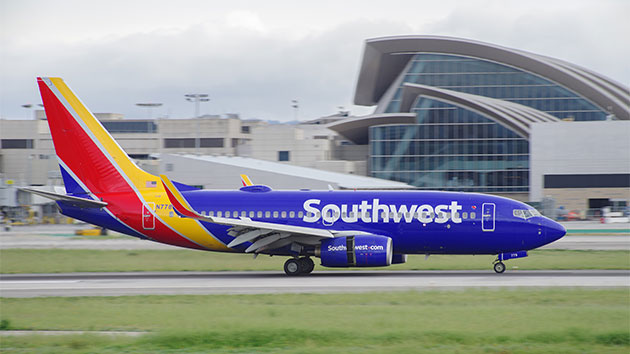 Angel Di Bilio/iStock(WASHINGTON) — The National Transportation Safety Board is calling for Boeing to redesign the engine covers on all of their Boeing 737 NG aircrafts following its investigation into a Southwest plane’s engine failure that resulted in the death of a passenger. Southwest Flight 1380 was forced to make an emergency landing in Philadelphia in April 2018 after it experienced an engine failure about 20 minutes after takeoff from New York City’s LaGuardia International Airport. There were 144 passengers and five crew members on board.When engine fan blades break, the debris is supposed to be contained and eject out the rear of the engine. However, during Flight 1380, the blade pierced through the engine cover, or cowling, hitting the fuselage of the aircraft near a window. The window shattered, which led to rapid depressurization and passenger Jennifer Riordan being partially sucked out of the cabin.Other passengers pulled the New Mexico mother back into the cabin and tried unsuccessfully to perform CPR. At the time, Riordan was the first passenger killed in the U.S. on a commercial airplane in nine years.”Jennifer’s family would like to thank the NTSB for the investigation and hope that these recommendations are taken seriously to ensure no other family has to go through this type of tragedy ever again,” the Riordan family said in a statement to ABC News. “In honor of Jennifer, please remember to be kind, loving, caring and sharing.”Capt. Tammie Jo Shults, 58, was in the cockpit — a pilot with Southwest Airlines and one of the Navy’s first women pilots trained to fly fighter aircraft.”My first thoughts were actually, ‘Oh, here we go.’ Just because it seems like a, a flashback to some of the Navy flying that we had done,” Shults said in a 2018 interview with ABC News’ Martha Raddatz. “We had to use hand signals because it was loud. And, there was, it was just hard to communicate for a lot of different reasons.”NTSB members praised Shults during their board meeting Tuesday afternoon for the quick thinking that led the plane to land safely in Philadelphia.”She used airmanship,” NTSB Chairman Robert Sumwalt said. “She used judgment because she felt that that was the safest thing to do.”The NTSB’s recommended redesign, which could take months, impacts 6,800 737 NGs in service. However, it is ultimately up to the Federal Aviation Administration to decide whether or not Boeing must implement the NTSB’s recommendations and issue an Air Worthiness directive. In 2018, the FAA issued an Air Worthiness directive that required more rigorous inspections of engine fan blades. After the NTSB meeting, the FAA issued a statement saying it will carefully review and respond to the NTSB recommendations.Boeing told ABC News that they are committed to implementing enhancements, including strengthening the engine covering.”Enhancements are being introduced into the inlet and fan cowl designs to enhance their ability to withstand an engine fan blade out event as well as to increase the overall capability of these structures,” Boeing said in a statement.Southwest Airlines is currently operating an all-Boeing 737 NG fleet since the grounding of the Boeing 737 MAX.”The safety of our fleet and the well-being of our employees and customers are paramount in importance,” Southwest said in a statement. “We look forward to reviewing the recommendations of the NTSB and continuing our ongoing work with the manufacturers to prevent a similar event from ever happening again.”The NTSB issued seven recommendations in total related to Southwest Flight 1380. Five of them were directed at the FAA, one at Southwest and one at the European Aviation Safety Agency.”The recommendations, as we’ve adopted today, are a reminder that it is not enough to just prevent the failure,” Sumwalt said. “We must also actively work to identify ways to minimize the effects of a failure if one does occur.” Copyright © 2019, ABC Audio. All rights reserved.

What’s behind rise of women in US manufacturing amid industry revival?