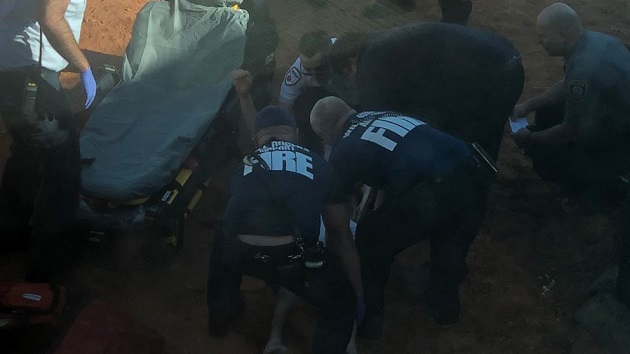 Rafael Pardeiro/Twitter(OKLAHOMA CITY) — Police at Will Rogers Airport in Oklahoma caught up with a teen wanted on a felony warrant Monday afternoon — they just had to chase him across the runway to do so.According to the airport, when United flight 5706 landed in Oklahoma City at about 1:45 p.m. local time, a 16-year-old passenger on the flight from Houston ended up jumping off the plane to avoid arrest.”He has a felony warrant out of Cleveland County, OK and was going to be picked up from the airport by deputies,” Will Rogers Airport said in a statement. “Apparently he knew he was going to be picked up and when getting off the plane, he jumped from the plane down to the tarmac and a foot chase by airline, airport and law enforcement took place.”He was then taken into custody by Will Rogers police.The teen managed to jump from a roof to the jet bridge and then to the ground inside a construction zone, according to the airport.He suffered minor injuries, was removed from the tarmac via stretcher and taken to the hospital.”United Airlines is cooperating with law enforcement officials following an incident with a passenger after United flight 5706 arrived at the gate in Oklahoma City this afternoon,” the airline said in a statement to ABC News. “We refer any additional questions on this matter to the local authorities.”Airport operations were not disrupted, officials said.The teen was wanted on a warrant for second-degree burglary, Oklahoma City ABC affiliate KOCO-TV reported. Copyright © 2019, ABC Audio. All rights reserved.