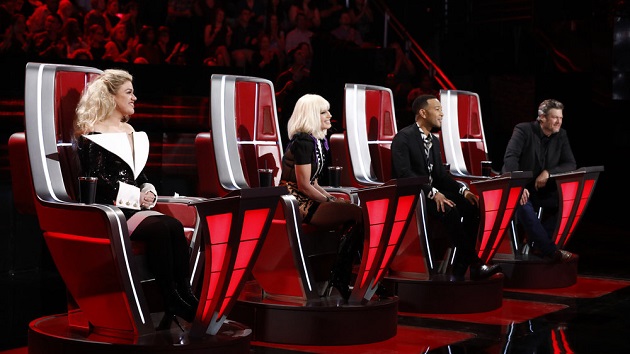 Trae Patton/NBC(NEW YORK) — The Voice  was live on Monday, with the top 13 artists competing for America’s vote, advised by their coaches Blake Shelton, Gwen Stefani, Kelly Clarkson and John Legend.  Two artists will be sent home on Tuesday, based on America’s vote.

On Monday, each artist took the stage with a special dedication.

Here are the highlights of Monday night’s show:

Team Gwen’s Joana Martinez dedicated “Get on Your Feet,” by Gloria Estefan — who, like Joana’s family, immigrated to the U.S. from Cuba and settled in Miami — her hometown.  Gwen told the 15-year-old pop singer that the secret to nailing her performance was working the stage. Martinez, who drew a standing ovation from all four coaches, including Gwen who was “shocked” at how well Joana pulled it off.

Max Boyle, who Kelly stole from John Legend, sent Allen Stone’s “Unaware” out to his family, particularly his young nice and nephew, explaining that as the youngest of six children, he never got to be a big brother. Max’s former coach cheered the artist’s “power and charisma.”  Clarkson also praised Boyle for nailing a tough song.

Myracle Holloway, saved by Gwen Stefani during the live playoffs, had some pretty big shoes to fill by dedicating Whitney Houston’s “I’m Your Baby Tonight” to her late grandmother, who raised her when her mother could not.  Kelly called Myracle “a champion.” Gwen hailed the performance as “perfect” and “incredible.”

Team Legend’s Will Breman dedicated “I Won’t Give Up,” by Jason Mraz, to his mom, who never gave up on Will, who was diagnosed with Asperger’s syndrome.  Following Breman’s performance, John and Blake were impressed with the singer’s emotion and connection to the song.

Kat Hammock, representing Team Blake, chose the traditional ballad “Danny Boy,” which she dedicated to her grandparents.  During rehearsals, Blake struggled to find anything wrong with her performance.  Afterwards, Shelton called her “one of the most important artists” he’s ever worked with on the show.

Team Legend’s powerhouse singer Katie Kadan dedicated “I’m Goin’ Down” by “ Mary J. Blige to “all the single ladies who’ve had their hearts broken.” John predicted a “tour de force performance” from Katie and got it.  The performance brought all four coaches to their feet, with Legend calling it the best one they’d seen on the show this season.

Hello Sunday, also from Team Kelly became the show’s first ever wild card artists last week.  The duo, both just 14 years old, sent Jessie J’s “Mama Knows Best” out to their moms, of course, but to their dads as well.  John Legend thought it was their best performance so far.  “You’re so talented, and you’re so freakin’ young,” added Clarkson.

The Voice returns Tuesday night at 8 p.m. ET on NBC.