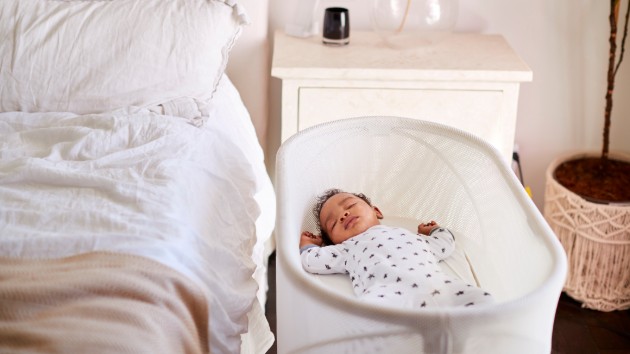 monkeybusinessimages/iStock(NEW YORK) — Peaceful nights are hard to come by for new parents. It is often an impossible task to soothe restless, crying newborns, but it’s a piece of cake for Cara Dumaplin, the founder and resident nurse of Taking Cara Babies.After helping parents who were struggling to get their babies to sleep, Dumaplin started Taking Cara Babies in 2013 when she realized that she wanted to help parents on a bigger scale.As a mother of four herself, Dumaplin also struggled to get her firstborn to sleep as an infant. “I was exhausted,” Dumaplin told ABC News’ Good Morning America. “My baby was cranky and my husband was at the end of his rope. And that got me started on this journey to infant sleep. I just wasn’t the mom that I knew I could be.” After months of sleepless nights, Dumaplin was on a mission to find the answers to getting her baby to sleep. She started using evidence-based scientific research and applied them to her daughter’s sleep schedule, and it worked.Taking Cara Babies has a team of 16 professionals who work to empower parents and families worldwide to get their little ones to sleep with resources like online classes, phone consults, email support, blogs and even social media. With over 500,000 followers on Instagram, Dumaplin’s baby-sleeping tips online aren’t just helpful for more than half a million parents, they’re changing lives.Here are some of Dumaplin’s tips for well-rested sleep with a newborn baby: 1. Give your baby a sleep space Dumaplin’s top tip is to start teaching your baby early to fall asleep on their own. In a safe sleep space, lay your baby in a bassinet or crib with nothing in it. If there’s any loose bedding, toys, stuffed animals or bumpers, get rid of it. According to the American Academy of Pediatrics, nothing should be in the crib before the age of 12 months. 2. Create a cozy and familiar environment While adults are most comfortable falling asleep in their own beds, Dumaplin points out that newborn babies were most comfortable when they were in the womb. In order to get them sleeping peacefully, she says to create a familiar environment similar to the womb to remind them of that safe, secure place.

“Think about how nice and secure a womb is — it’s snug in there,” she said. “So that’s why we swaddle babies in the first few weeks and months of life.”

Dumaplin also says a sound machine can help replicate the sounds that a baby remembers when they were in the womb. 3. Learn a baby’s sleepy cues Dumaplin says that in order to get on the same page as your baby, you have to learn their language, and that’s through sleepy cues. She says that when babies start staring off into space or when their eyebrows turn red, it’s a sign that they’re tired.Copyright © 2019, ABC Audio. All rights reserved.