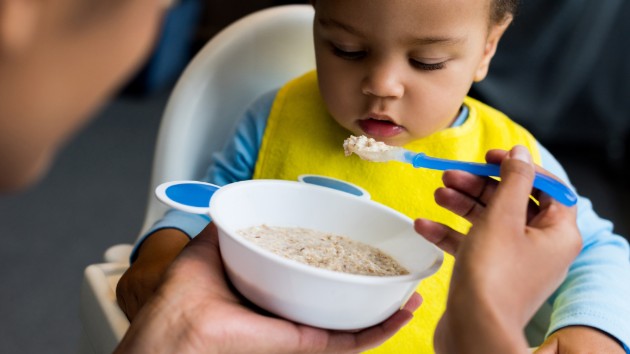 LightFieldStudios/iStock(NEW YORK) — Ever struggled with feeding a baby? For many parents it can be a frustrating and messy event during every meal, but Megan McNamee and Judy Delaware are teaching other parents how simple it can be. They’re the founders and experts behind “Feeding Littles,” a website where they provide online courses for parents who are trying to learn how to feed their infants or toddlers.“I think so many parents have this kind of expectation that when they have a child they’re going to serve them every kind of food, and they’re gonna eat every kind of food, and sometimes that just doesn’t happen,” said McNamee. “We realize that can be more complicated than we think.” For five years, the duo has been helping parents become more comfortable with feeding their kids through different techniques that either introduce them to new foods, re-introduce foods they once loved, how to get them to feed themselves and even some proper eating etiquettes at the dining table to make mealtimes more peaceful.The duo started their program about five years ago when McNamee was teaching infant feeding classes as a dietician nutritionist in the Phoenix, Arizona area. She was introduced to Delaware, an occupational therapist and feeding specialist, by a mutual friend when she was struggling to teach those infants who became toddlers how to eat food. With each of their skills, and mothers themselves, they wanted to do more to help other parents and began their program to provide support for parents around mealtimes. “We had a mission that we wanted to accomplish,” Delaware told ABC News’ Good Morning America. “We knew what we were gonna do within the first phone call.” Since 2014, their business has grown and they now have nearly half a million followers on Instagram.Here are a few of Judy and Megan’s tips for feeding babies: 1. Let babies feed themselves To introduce new foods to babies, Megan and Judy teach a methodology where they encourage parents to have their babies feed themselves from the start. “We’re talking about longer strips of food that the baby can hold onto, and grab with their hand, and bring to their mouth,” said Megan who suggested starting with foods that are accessible like avocados, sweet potatoes and bananas. By introducing foods as early as possible, parents will be able to detect food allergies sooner rather than later. “In the past, we used to wait to be able to introduce those foods,” said Judy. “The American Academy of Pediatrics is recommending to start those foods at a much younger age before a child is actually nine months.”2. Teach intuitive eating Judy and Megan say how you feed your baby is just as important as what you feed them. “Intuitive eating is essentially trusting our body’s innate signals of hunger and fullness to know when to start eating, when to stop and what foods feel best in our bodies,” said Megan, who mentioned that it’s a skill that many adults don’t have. Although babies can’t overfeed themselves, parents can apply intuitive eating to mealtimes by getting their babies to feed themselves. “We’re trying to keep them in kind of this safe sphere where they know that they’ll get food when they’re hungry, at a regular interval, not necessarily all day long so they’re grazing, but more regular meals and snacks where they can tell when they’re full,” said Megan. 3. Reintroduce foods Sometimes, babies may start off liking a certain food and then rejecting them. Judy and Megan say it’s completely normal developmentally for this to happen. Their solution? Simply, don’t give up and don’t change your eating routine. “Keep doing what you’re doing,” said Judy. “Continue to offer meals at the same time. Be the best role model that you can be with your child.” Judy and Megan suggest turning the food into something else like a puree or a mash and try 20 or even 30 times if they keep rejecting the food. Copyright © 2019, ABC Audio. All rights reserved.