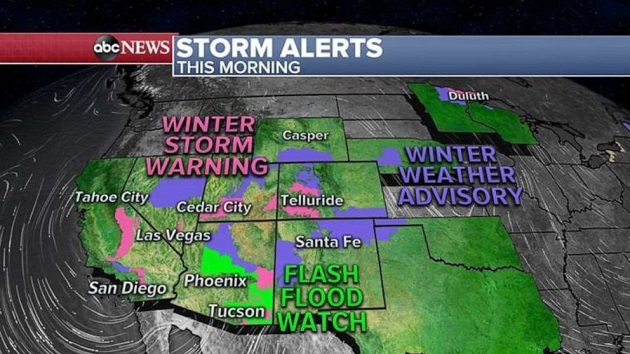 ABC News(NEW YORK) — The first major winter storm is moving through the Southwest with more than 4 inches of rain falling in San Diego County in southern California.Las Vegas had a daily record rainfall of 0.5 inches which is the most rain in a single November day since 2013.Snow totals so far are near a half foot from California to Arizona and it’s still snowing.Storm alerts continue for 14 states Thursday morning from California to Maine as a complex storm system moves through the U.S. from coast to coast.On Thursday morning, this double low system stretches from the Rockies to the Great Lakes bringing heavy snow and rain along with it.Heavy snow and rain is falling Thursday morning in parts of the Upper Midwest, where some areas are seeing more than half a foot of fresh powder.Chicago is seeing heavy rain Thursday morning and northern Minnesota is seeing heavy snow. This area of rain and snow should move into the New England by Thursday night and will bring snow and icy mix to Maine.For the rest of Thursday, heavy snow will continue in the Rockies, especially in the Colorado Rockies with snow even flying in Denver. Denver should not see much snow, but up to 2 feet of accumulation is possible in the mountains.By the Friday evening commute, or if you are beginning your holiday travel, the Northeast will clear out but the southern part of that western storm will redevelop along the Gulf Coast bringing heavy rain to the southern states.The southern storm will move up the East Coast Saturday night and will bring heavy rain from Washington, D.C. to New York City and Boston and heavy snow to northern New England.Locally, 3 inches of rain possible in the South and up to 2 inches of rain is possible in the Northeast.Snow could be heavy in northern New England Sunday morning and, locally, more than a half foot is possible.This unsettled stormy pattern will continue into the holiday week next week.Copyright © 2019, ABC Audio. All rights reserved.