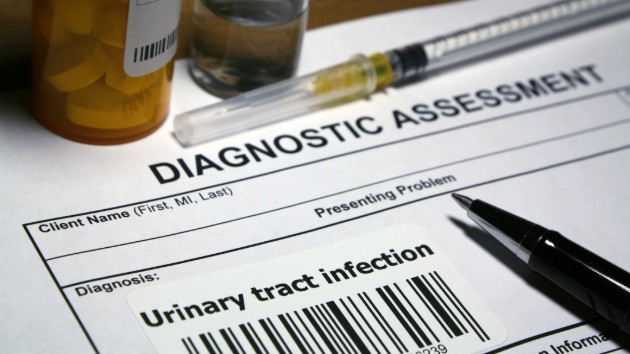 Hailshadow/iStock(NEW YORK) — If you’re reading this, there’s a good chance you’ve experienced a urinary tract infection.A UTI occurs when bacteria enters the bladder from the urethra. It can affect any part of your urinary tract, but bladder infections are the most common. As many as 60% of women will experience a UTI during their lifetime, according to the National Institute of Diabetes and Digestive and Kidney Diseases.Symptoms of UTI’s vary and can be highly unpleasant due to symptoms like constant peeing or urges to pee, even when your bladder is empty, and pain or burning while peeing.All genders can get a UTI, but women are more susceptible because of anatomy: Women have shorter urethras that are closer to the rectum than men, making it easier for bacteria to infect the urinary tract.“We see them in every age group,” said ABC News Chief Medical Correspondent Dr. Jennifer Ashton. “Sometimes they’re isolated for a woman or teenage girl and sometimes they can be chronic or recurrent.”Pregnancy, sexual activity, menopause and a previous UTI can increase your risk of getting one, and babies and postmenopausal women are more likely than other age group to get them.

I think I have a UTI. What should I do?First, drink plenty of water. This helps flush out any bacteria adhering to the wall of the bladder. If you really want to hydrate, several studies have found that drinking cranberry juice can help prevent UTIs by protecting against bacteria buildup in the bladder.If possible, ask your health care provider for a urine culture. A urine culture tests for bacteria in your pee, which helps your doctor identify the antibiotic that’s best to treat it.“It is so important to try to get that urine culture because if your symptoms disappear and then come back, and you have to be treated again, we really need to know what that bacteria was that was causing the infection,” Dr. Ashton said.Results of urine cultures can take a few days, so if that’s not logistically possible, ask for a urine microscopy. This test quickly checks for blood, glucose, pH and byproducts of bacteria in the urine as potential indicators of a UTI. It can even be found at the drugstore if you want to test yourself.

Do I need antibiotics?Then comes what Ashton calls “the fork in the road”: Do you get a prescription for antibiotics or leave the UTI untreated?In some cases, it’s safe or even best not to take antibiotics. About 40% to 50% of UTIs will disappear on their own without any antibiotic treatment. What’s more, frequent exposure to antibiotics can actually make bacteria resistant to the drugs, a problem commonly associated with treating UTIs.”Not every time that bacteria is found in the urine is treatment with antibiotics necessary,” Ashton said. “It’s important for people to know that if they are having symptoms, they don’t have to be frightened that not taking a prescription of antibiotics will endanger their health.”Over-the-counter Pyridium and cranberry juice can provide relief as you power through symptoms.A health care provider can help you decide if treatment is necessary and, if so, what the right treatment is. Not every antibiotic is appropriate for a urinary tract infection, which is caused by E. coli nearly 90% of the time.”We prescribe certain antibiotics based on what bacteria we think is most likely to be causing the given infection,” Ashton said.Nitrofurantoin and bactrim are best for treating a UTI, according to the Infectious Disease Society of America.Other antibiotics often used to treat UTIs, such as ciprofloxacin and levofloxacin, can have serious side effects. Ciprofloxacin, in rare cases, can be associated with tendon ruptures and psychiatric issues.”You want to make sure, if you’re being treated, that you’re taking the right antibiotic, the right dose, for the right length of time and not just automatically take what’s been handed to you,” Ashton said.How do I prevent future UTIs?The best way to prevent a possible infection is to stay hydrated.”We have a saying in medicine and surgery,” Ashton said. “The secret to pollution is dilution.”When flooded, bacteria have a harder time surviving. That means guzzling water, not sugary drinks, which can actually irritate your bladder.Peeing before and after sex, and taking showers after sex will also ensure that bacteria is pushed out.”This is not suggesting that people are dirty,” Ashton said. “But we have to remember when you talk about bacteria, you’re oftentimes talking about things that are microscopic.”