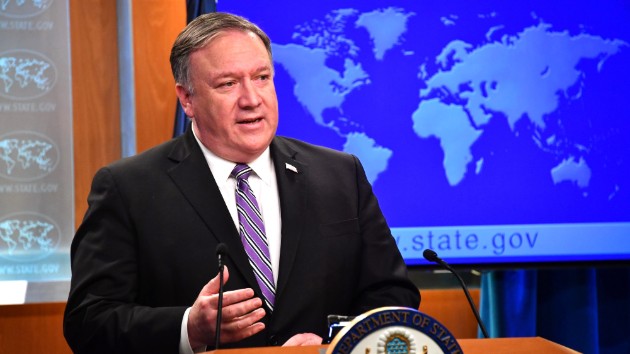 State Department Photo / Public Domain(WASHINGTON) — Gordon Sondland, the U.S. ambassador to the European Union, told the House Intelligence Committee on Wednesday that he kept Secretary Mike Pompeo informed of his efforts to persuade Ukraine to announce investigations sought by President Donald Trump, raising new questions about how Pompeo has characterized what he knew about the Ukraine pressure campaign at the center of the impeachment probe. “We kept the leadership of the State Department and the [National Security Council] informed of our activities,” Sondland said in his opening statement. “They knew what we were doing and why.” Sondland described multiple exchanges with senior State Department officials — and Pompeo himself — updating them on efforts to secure a commitment from Ukrainian President Volodymyr Zelenskiy to investigate Burisma, an energy company with links to Hunter Biden, former Vice President Joe Biden’s son, and unsubstantiated theories about Ukrainian interference in the 2016 election.In July, Sondland said he sent an email to Pompeo and a “lot of senior officials” summarizing his efforts to prepare Zelenskiy for a phone call with Trump.“As I communicated to the team, I told President Zelenskiy in advance that assurances to ‘run a fully transparent investigation’ and ‘turn over every stone’ were necessary in his call with President Trump,” Sondland said.He added, “Everyone was in the loop. It was no secret,” speaking generally about what top Trump administration officials knew about the hold on Ukraine military aid.Sondland said he emailed Pompeo in August, ahead of the president’s planned September trip to Warsaw, Poland, to schedule a pull-aside between Trump and Zelenskiy to discuss how to “break the logjam” between the U.S. and Ukraine.Pompeo replied “Yes” to the request to find time on Trump’s schedule, according to an email Sondland disclosed on Wednesday. The president eventually canceled the planned trip, and sent Vice President Mike Pence in his place.In September, Sondland said he emailed Pompeo again, thanking him for traveling to Europe after Pence’s trip to Poland.“All good, You’re doing great work; keep banging away,” Pompeo responded.“State Department leadership expressed total support for our efforts to engage the new Ukrainian administration,” Sondland said Wednesday.House Democrats, and Sondland during his public testimony, called for the State Department to cooperate with the impeachment and investigation, and comply with subpoenas for documents and records.As Pompeo flew back from a trip to Brussels, the State Department issued a carefully worded statement limited in scope denying that Sondland had told Pompeo he believed Trump had linked security assistance to Ukraine to investigations of political opponents.“Gordon Sondland never told Secretary Pompeo that he believed the President was linking aid to investigations of political opponents. Any suggestions to the contrary is flat out false,” Morgan Ortagus, the State Department spokesperson, said.Throughout the House’s impeachment inquiry and in several interviews with ABC’s This Week, Pompeo has repeatedly brushed off questions.Contrary to Sondland’s comments during his testimony that Pompeo and others were aware, Pompeo has said he never saw the kind of quid pro quo that acting White House chief of staff Mick Mulvaney referred to as a usual practice.

“Get over it. There’s going to be political influence in foreign policy,” Mulvaney said Oct. 17 at a White House news conference, though later the same day he put out a statement claiming the media had misconstrued his comments.When ABC News Chief Anchor George Stephanopoulos asked Pompeo on Oct. 20 if it would be appropriate to put conditions on aid to Ukraine, Pompeo said he would not comment on a hypothetical.

“The chief of staff said it did,” Stephanopoulos said.”George, it — you asked me if this happened,” Pompeo said after a pause. “It’s a hypothetical. I have told you what I observed, what I saw, the process related to this very funding.”Pompeo told reporters in Brussels earlier on Wednesday that he hadn’t had a chance to review Sondland’s testimony, but he defended U.S. Ukraine policy under Trump in general.“I know precisely what American policy was with respect to Ukraine. I was working on it.” Pompeo said. “I’m incredibly proud of what we’ve accomplished.”And he continues to remain silent when asked repeatedly about the public testimony from State Department officials, including former U.S. Ambassador to Ukraine Marie Yovanovich and Bill Taylor, the top U.S. diplomat in Ukraine.“State Department leadership expressed total support for our efforts to engage the new Ukrainian administration,” Sondland said Wednesday.House Democrats, and Sondland during his testimony on Wednesday, called for the State Department to cooperate with the impeachment and investigation and comply with subpoenas for documents and records.