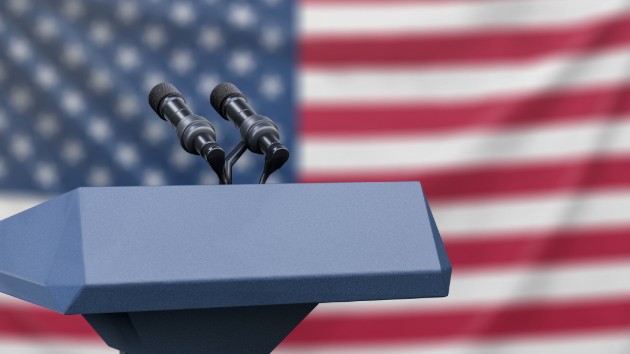 Derek Brumby/iStock(ATLANTA) — Massachusetts Sen. Elizabeth Warren led Wednesday night’s Democratic debate in speaking time for the second debate in a row. Warren spoke for 13:54 minutes over the course of approximately 2 1/2 hours. Former Vice President Joe Biden had the second-highest speaking time, clocking in at 12:57 minutes. As public impeachment hearings play out in Washington, Biden championed his candidacy on the debate stage in Atlanta as being the best matchup against President Donald Trump.Following a recent surge in Iowa polls, South Bend, Indiana, Mayor Pete Buttigieg ranked third in speaking time overall at 12:25 minutes.Wednesday’s debate was the fifth of the 2019 Democratic primary season and the first to be moderated by an all-woman panel of moderators. As for the women on the stage, California Sen. Kamala Harris came in fifth in speaking time at 11:33 minutes; Minnesota Sen. Amy Klobuchar came in sixth at 10:40 minutes; and Rep. Tulsi Gabbard of Hawaii came in eighth with 9:20 minutes of speaking time.Entrepreneur Andrew Yang came in last with a speaking time of 6:59 minutes.The full list of candidates’ speaking times is as follows: