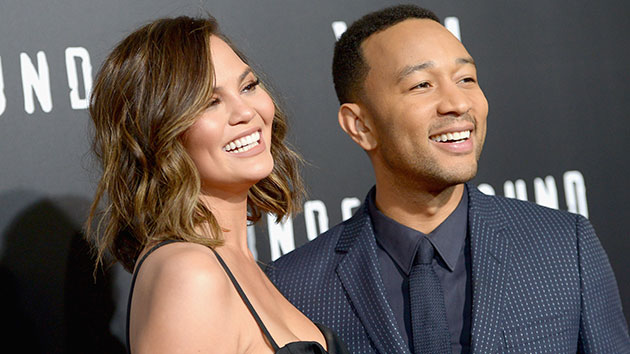 Chrissy Teigen posted the hilarious video to her Twitter of her reacting to John’s outfit, which is best described as Buddy the Elf meets Magic Mike.

The “All of Me” artist, wearing a gold chain, holiday vest and elf hat, flashes his abs as he sensually pelvic thrusts in shiny cranberry jeans and candy cane striped socks.

The camera quickly pans to the stone-faced Teigen, who is tossing her man some serious side-eye.  As the camera zooms in, she glances away in equal parts shock and disgust as if she’s inwardly debating if being married to the Sexiest Man Alive is truly worth it.

Legend then notices his wife’s expression off screen and explodes in laughter as he buttons up his vest.

“Sexiest man title has been a curse upon my family ” Teigen sarcastically captions in the tweet.

If it’s any consolation to The Voice coach, his three-year-old daughter Luna liked his unconventional Christmas outfit.  She is seen happily running ran up to her dad while he’s dancing.

“Tomorrow is not guaranteed”: John Stamos on the “heartbreaking” lessons he learned from losing Bob Saget

Chrissy Teigen says pregnancy loss from two years ago was an abortion: “Let’s call it what it was