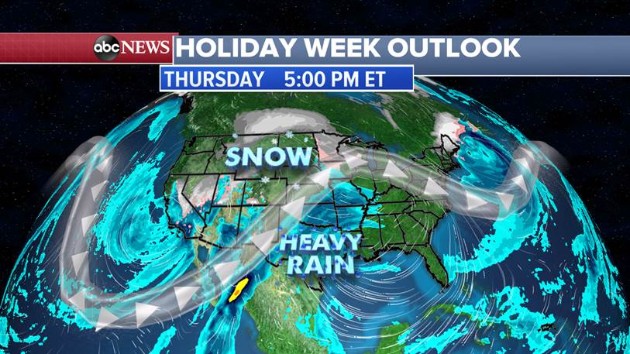 ABC News(NEW YORK) — Stormy weather is expected to start this weekend and last through Thanksgiving week. On Thursday, a storm in the west dumped more than 1 foot of snow from northern Arizona to the Colorado Rockies. Even the Grand Canyon saw up to 3 inches.Meanwhile, heavy hail struck Phoenix, Arizona, coating roads and neighborhoods, nearly looking like snow.That same storm brought about 1 inch of snow and freezing rain to Denver Thursday night, causing dangerous driving conditions and a crash involving over 50 cars.By Friday morning that storm system was moving into the South, bringing heavy rain. This weekend the storm will veer to the Northeast, dropping some rain and snow. As Thanksgiving week gets underway, a fast-moving jet stream will buckle and pick up lots of moisture from Pacific Ocean, helping to create several storm systems that will move across the country from the West Coast to the East Coast. More heavy rain and flooding are expected for Southern California and the Southwest. At the same time, cold air from Canada will invade the northern states. There could be several snowstorms next week from the Rockies into the Great Lakes.Copyright © 2019, ABC Audio. All rights reserved.