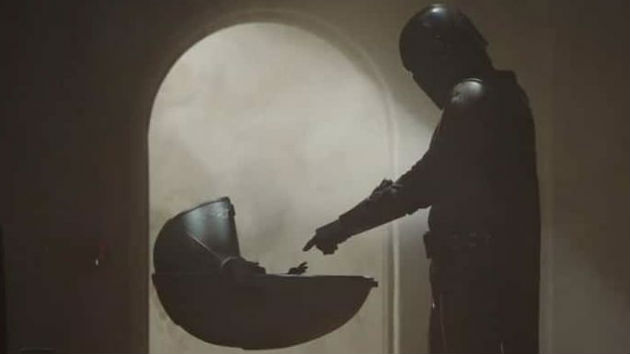 Walt Disney Pictures(LOS ANGELES) — (‘The Mandalorian’ spoilers ahead) Even if you’re not all caught up on the Disney+ hit The Mandalorian, no doubt your social media feeds have shown you that one of the biggest stars in Star Wars right now doesn’t even have a name.

“Baby Yoda” is the nickname everybody has given to the creature that’s featured prominently in the now three-episode space Western. It’s the critter that looks like a baby version of the Jedi Master, although according to the show, the teething tot is 50. Remember, Yoda was 900 years old when he “became one with the Force” in Return of the Jedi.

Baby Yoda is so cute, it’s already launched a thousand memes and even spawned an article in ELLE, for Fett’s sake. However, despite the fan love, you can’t buy Baby Yoda merch. But help is on the way.

The Mandalorian show creators Jon Favreau and Dave Filoni thanked Lucasfilm and parent company Disney for holding fire on the merchandise, because such toys and other items would spoil the shocker ending of the show’s debut episode, when Pedro Pascal’s titular gunslinger found the cute little green guy. They told Entertainment Tonight they were pleased, and shocked, that the secret held.

For the uninitiated, Yoda’s species has remained a mystery even to the most die-hard Star Wars fan. Only Star Wars creator George Lucas himself reportedly knows the background of the very Force-sensitive, syntax mixing creatures.

Stay tuned, you must.