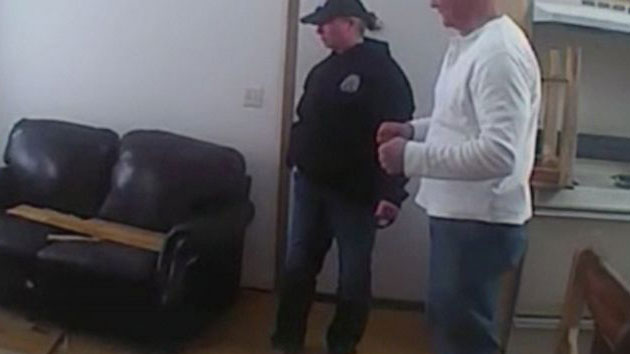 Obtained by ABC News(DENVER) —  This week, Patrick Frazee was convicted of killing Kelsey Berreth, who was his fiancee and the mother of his young daughter, and new video released by investigators shows the crime scene where she was beaten to death with a baseball bat.The video shows investigators walking around the condo with Krystal Lee, who had been secretly dating Frazee and who testified that Frazee asked her to help clean up the crime scene.”When I first walked in, I saw blood all over the floor. I saw blood up the wall,” Lee said during the walk-through. She said Frazee told her to come over to help clean up a mess, and when she arrived she saw blood splattered on the walls and floors and on random items around the kitchen.”That cinnamon roll pan had blood on the tinfoil,” she told investigators in the newly released video.Lee, who has admitted to getting rid of Berreth’s phone and has pleaded guilty to destroying evidence, could face up to three years in prison. She’s still awaiting her sentence.She testified that Frazee discussed plans to kill his 29-year-old fiancee on at least three other occasions.Neither Berreth’s body, nor the murder weapon, have been found. She was last seen on surveillance video entering the condo on Thanksgiving 2018 with her 1-year-old daughter. Lee told investigators Berreth’s body was placed in a black tote, which was seen in the back of Frazee’s truck on surveillance video.Lee told investigators that Frazee burned the tote and that’s why authorities, with the help of cadaver dogs, haven’t found Berreth’s body.Frazee was found guilty of first-degree felony murder and three counts of solicitation to commit murder. He was sentenced to life in prison without the possibility of parole.”Your actions were vicious, senseless, without reason nor explanation. … Kelsey spent her last night caring for you — you repaid that kindness by viciously beating her to death,” Judge Scott Sells said on Monday. “After you beat her, you burned her body like a piece of trash. Your crimes deserve the absolute punishment available.” Copyright © 2019, ABC Radio. All rights reserved.