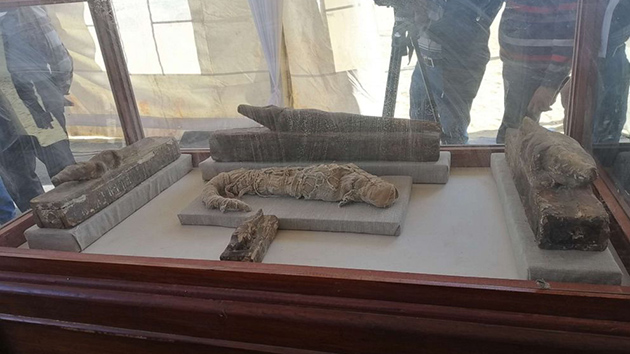 Hatem Maher/ABC News(CAIRO) — Egypt unveiled what it described as a “one of a kind” cache that contained hundreds of statues and mummified animals. This discovery also included the “biggest scarab in the world” as well as mummies of at least two cubs at the Saqqara necropolis, some 30 kilometers south of Cairo.The announcement was made after a year-long excavation near the sanctuary of the goddess Bastet or Bubasteion, which is home to the catacombs of mummified cats. The findings date back to the 26th dynasty in the seventh century BC, officials said.”We found hundreds of mummified animals and statues at the cache, and we still have a lot of others in store,” Mostafa El-Waziri, who heads Egypt’s Supreme Council of Antiquities, told reporters Saturday.”The loveliest discovery out of those hundreds is the scarab; it’s the hugest scarab all over the world. The loveliest surprise is that we also found two small cubs for the first time.”Twenty, 30 years ago, a French mission … found the remains or a skeleton of a lion just meters away, but we can announce that now it’s the first time to find a complete mummy of a small lion,” El-Waziri said.While Antiquities Minister Khaled El-Enany said it might be early to say the two mummies belong to cubs, despite their apparent big sizes, El-Waziri insisted CT scans and two famed archeologists have “95 percent” confirmed the findings.El-Waziri also said that three other “big cats” were also discovered but that they will undergo further scans to determine their identity amid expectations that they might be mummies of cubs, leopards, cheetahs or tigers.One of the highlights of the discovery, according to El-Waziri, was a “beautifully carved” statue of Neith, the ancient goddess of war.The collection also includes 75 wooden and bronze statues of cats and statues of other animals, including falcons, crocodiles and ichneumons.”Today’s discovery is a museum in itself. We still have to find a place to house those objects,” El-Enany said.It marks Egypt’s second significant discovery in almost a month. In October, the antiquities ministry unveiled 3,000-year-old wooden coffins in the southern city of Luxor.The country hopes the recent series of discoveries will help lure back tourists and revive its vital tourism industry, which has been battered by years of turmoil.Copyright © 2019, ABC Radio. All rights reserved.