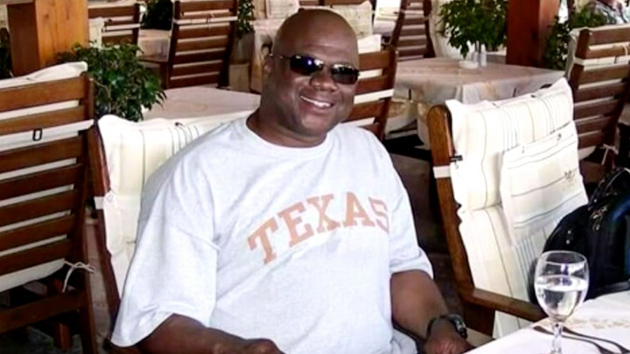 WFAA(DALLAS) — A Navy veteran found dead inside his apartment had been deceased for three years and the case has left his grief-stricken family searching for answers as to how exactly this could have gone unnoticed for such a long period of time after they repeatedly reported his absence to the authorities.Ronald Wayne White, who would have been 51 at the time of his death in 2016, worked as a defense contractor and traveled around the world for work. His body was found last week when the DeSoto Town Center Apartment complex were investigating multiple units of where tenants had not been using water. But when they forced the bolted door open to White’s apartment during their investigations, they found him dead on the kitchen floor. The medical examiner estimated that he had been dead for three years, according to ABC News’ Dallas affiliate WFAA.”When the medical examiner told me three years, my knees gave away. Three years? And that’s what I can’t get past in my brain. I can’t get past three years,” his mother Doris Stevens said. “My biggest question is, how in the world could my son have been dead in that apartment and nobody knows anything?”Stevens, who lives in Long Island, New York, said that her son had been in touch with her on a regular basis.”My son would call me at least twice a month,” his mother told WFAA. “He would call me from Egypt. He would call me from the Philippines. He would call me right from Dallas.”The calls suddenly stopped 3 years ago but Stevens became particularly suspicious that something was wrong when she couldn’t get a hold of him for his birthday in April 2017.Stevens allegedly reported White missing to multiple police departments and even considered trying to hire a private investigator but didn’t have enough money to do so.”All them days, holidays, I just suffered. Because nobody wanted to help find him,” Stevens said.She said police told her that because her son was an adult and traveled extensively for work, they could not classify him as a missing person and pursue the case.Pete Schulte, a detective with the DeSoto Police Department said that White had a month-to-month lease on his apartment and the money was taken from an account linked to his Navy retirement fund. He also confirmed that a neighbor did complain about 2 years ago of some liquid seeping through the ceiling into her apartment but that maintenance expected it and decided to move on from the issue when the leaking stopped and nobody came to White’s door.”What I can tell you is it is very clear when officers entered that he had been there for a while,” Schulte confirmed. “The way he was found, the way the apartment was arranged and so forth, there was zero indication of foul play.”White’s apartment was new and was located on the third floor at the very northwest corner of the apartment complex. Police said that it was very well-insulated and all of the windows were sealed and locked tight which also added to how he could have gone undetected for 3 years.Detectives found White’s gray Ford F-150 pickup truck parked in the DeSoto Town Center parking garage covered in dust and several advertising flyers under the vehicle’s windshield wipers but confirm that it was never reported as suspicious. In his home, they found medications for diabetes dated back to 2016 which is consistent with his estimated date of death.Funeral arrangements are pending while more tests are being performed to see if the medical examiner can determine the cause of death. But even if his cause of death is determined, his family still remains heartbroken.”I can’t hardly cope with it to be honest with you,” his mother said. “I can’t hardly deal with it.”Copyright © 2019, ABC Radio. All rights reserved.