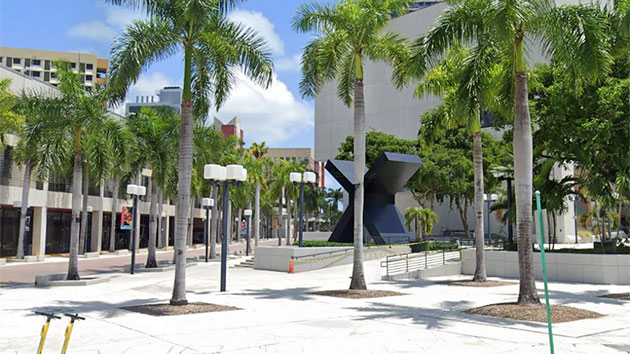 Google Maps Street View(MIAMI) — A South Florida man has been arrested for allegedly planning bomb attacks against two college deans, according to federal authorities.Salman Rashid, 23, of North Miami Beach, was arrested Monday for a charge of solicitation to commit a crime of violence, according to a criminal complaint filed in the Southern District of Florida on Monday.The FBI initiated an investigation into Rashid in April 2018 after reviewing his public Facebook posts, which allegedly “advocated for the violent overthrow of democracy,” according to the complaint. The posts also “exhibited a growing hatred for America” as well as secular Muslims and non-Muslims, authorities said.During the investigation, the FBI became aware of threats Rashid allegedly made over text messages to a female student at Miami Dade College, which prompted her to file a report with campus authorities. The texts allegedly detailed unrequited romantic feelings Rashid expressed to her, according to the complaint.”You will not have excuses, will not be given a choice and will have to come close to me,” a portion of one of the messages read, according to the court documents.Rashid was suspended from Miami Dade College in December 2018 over the threatening texts, authorities said.Rashid allegedly continued to try to contact the female student through April 2019 and allegedly tried to follow her to her car after class on March 21, authorities said. He also allegedly conducted an internet search for “how to stalk someones houses,” the FBI discovered after obtaining a search warrant.He was later expelled from Broward College on May 8 for failing to disclose the disciplinary manner at Miami Dade College regarding the texts, according to the complaint.In May 2019, “without provocation,” Rashid allegedly solicited a confidential human source to contact members of ISIS and instruct those ISIS members to conduct a terrorist attack on his behalf, authorities said.Rashid continued to instruct the confidential source throughout the summer and fall, indicating that an attack on a religious building or nightclub “would be suitable,” according to the complaint.Then, allegedly at Rashid’s request, the FBI introduced him to another confidential source who made him or herself out to be a member of ISIS, willing to carry out an attack.Between Nov. 8 and 9, Rashid allegedly chose two specific individuals to target — a dean at Miami Dade College and another dean at Broward College, authorities said. He allegedly asked the confidential source to plant explosive devices used in the attack “as big as possible” and place them in the deans’ offices.Rashid allegedly wrote in one text message, “these two people, they need to die,” according to the complaint.He allegedly insisted that the attack “take place soon” and that the confidential source posing as an ISIS member “should make sure to escape alive.”If convicted, Rashid faces up to 20 years in prison. He was born in Bangladesh and is a naturalized U.S. citizen, authorities said.He made his initial appearance before U.S. Magistrate Judge Chris M. McAliley on Monday. His pretrial detention hearing is scheduled for Wednesday, and his arraignment is scheduled for Dec. 9. It is unclear if he has retained an attorney.Copyright © 2019, ABC Audio. All rights reserved.