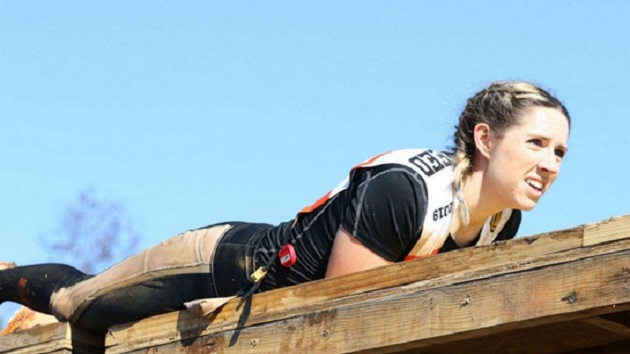 Tough Mudder(GULF BREEZE, Fla.) — It’s a familiar story for many parents.Though Kristen Reed had been a college athlete, things changed as an adult. After she got married she stopped running. She struggled with infertility and had two miscarriages. Suddenly, she found herself “unhealthy and overweight,” she told “Good Morning America.”But just last weekend, the mom of three completed a grueling 24-hour fitness competition called “World’s Toughest Mudder” and is indisputably fit.The best part? Reed says “anyone can do it.”She was just 10 weeks postpartum when she entered her first Tough Mudder competition. Her son, Colton, had arrived six weeks before his due date and she’d had severe pre-eclampsia.But Reed had signed up for the event a year prior and so with just three weeks of training, she completed the 10-mile event.”I had to walk a lot of it,” the Gulf Breeze, Florida, mom said.It didn’t matter. Reed said that the best thing about the Tough Mudder competitions is the community.”Everyone is there to support you and cheer you on,” she said. “It’s why people come back year after year.”That’s exactly what Reed herself has been doing. In May of 2017, after the birth of her second child, Caden, she won the “Tougher Mudder” competition in Atlanta.She was in great shape, she said, but then was surprised to learn she was pregnant with her third child.”I would get fit and then be pregnant again,” she said.This time, however, was a little different. “It was the healthiest I ever was when pregnant,” she said. “I was running until 22 weeks.”Now, her youngest child is almost 2 and Reed has completed the most intense competition of her life.”[World’s Toughest Mudder] is hard physically and mentally,” she said. The obstacle course is challenging and there “are always surprises thrown in.”It takes place from 12 p.m. on a Saturday to 12 p.m. on Sunday. The nighttime temperatures in Atlanta, where the event was recently held, dipped into the 30s.Though there were “highs and lows,” she said, she’ll be back for the 2020 event in Dallas.Her advice to other parents who want to get fit: “Let go of the guilt and give yourself grace,” she said. “There will be days the kids are sick and you just can’t work out. But do it for your inner self and not your outer appearance.”But above all else, “Sign up for one of the events and get in on the calendar,” she added. “You’re always motivated to train for something you’ve already paid for.”