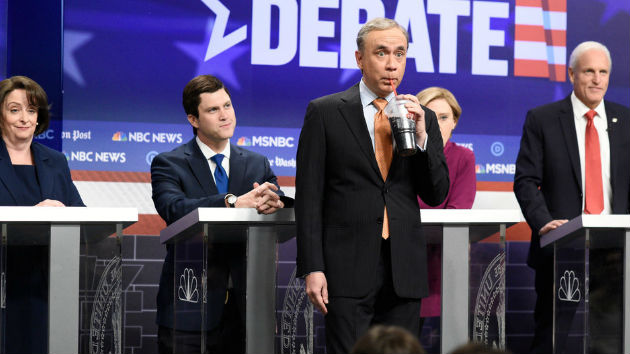 Here are some highlights:

Kate McKinnon’s Senator Elizabeth Warren claimed she was the best candidate to beat President Donald Trump because of her “mom-hosting-Thanksgiving energy.”

“I’m a little overwhelmed because I thought 10 people were coming and now there’s 30 million,” she huffed. “But I promise dinner will be ready if you just get out of the kitchen and stop asking questions.”

Rudolph’s Harris ignored polling numbers in favor of “viral moments,” adding, “Mama needs a GIF.” She repeatedly mugged to the camera in imitation of various gifs, including that “Woman yelling at a cat” one.

David’s Sanders bragged that he was the, “first heart attack patient to show up to the emergency room on a city bus” — slightly ironic considering that in real life, his competitors have tagged him for his frequently taking private planes.

Klobuchar insisted her trembling was not due to nerves, but rather her “‘Spidey Sense’ that tingles whenever we need a moderate to say, ‘Girl, we can’t pay for that!"”

Said Woody’s Biden, “America, I see you and I see the faces you all make.  When I talk, you’re scared.  You’re scared I’ll say something off-color, or worse, on color.”

Remarked Armisen’s Bloomberg, who crashed the debate after slipping the doorman $30 million, and toting a Big Gulp — a large soda the type of which he tried to ban as mayor: “I’d love to see those Trump supporters come up with a conspiracy theory about a Jewish billionaire with his own media company.”

Cecily Strong’s Tulsi Gabbard, warned, “I smell your fear and it makes me stronger.” I’m wearing the white suit of your fallen hero Hillary Clinton.  Now fight me cowards,” she added.

She also aped Disney villain Cruella de Vil, commenting “I have no interest in those dalmatian puppies,” as menacing music played.