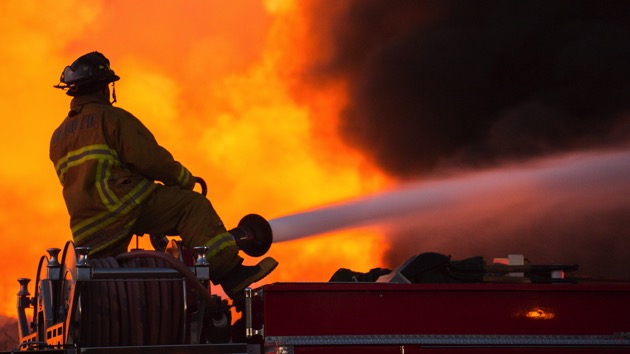 MattGush/iStock(SANTA BARBARA COUNTY, Calif.) — A wildfire that has erupted in Santa Barbara County is 0% contained as of Tuesday after it scorched 4,300 acres. No injuries have been reported in the Cave Fire, that broke out Monday afternoon and was fueled by winds up to 50 mph.Over 5,000 residents evacuated, Santa Barbara County Sheriff Bill Brown said Tuesday. No homes have been destroyed, officials said.The Cave Fire is creating some of the toughest firefighting conditions anywhere in the world, Los Padres National Forest Fire Chief Jim Harris said Tuesday.Harris said the land is extremely dry not only because it’s the end of the dry season, but also because several offshore wind events have dried the area out even more.Santa Barbara County Fire Battalion Chief Anthony Stornetta described it as “quite the firefight” as winds move up slope, down slope and across slope.The cause of the blaze is unknown, Brown said.

#CaveFire– A Cal Fire S-2 makes a phos-chek drop near a home on the east side of Painted Cave Road Tuesday morning in Santa Barbara County. pic.twitter.com/2pKkgYV1gx

Rain is heading to the region on Wednesday, which could help fight the fire. But the 1 to 2 inches of rainfall could also cause debris flow in parts of coastal Southern California.

Here comes our cold winter storm, currently over northern CA and western OR. Rain starts near the #CaveFire around 3am Wednesday. #CAwx https://t.co/pZLKO4u95V

The Cave Fire also caused some power outages in parts of southern Santa Barbara County. The number of those without power was not clear.Stornetta said Tuesday that the number-one priority is to get residents back home.Click here for health tips for residents who are escaping the flames.

Months after father of four murdered in Florida, wife still searching for answers