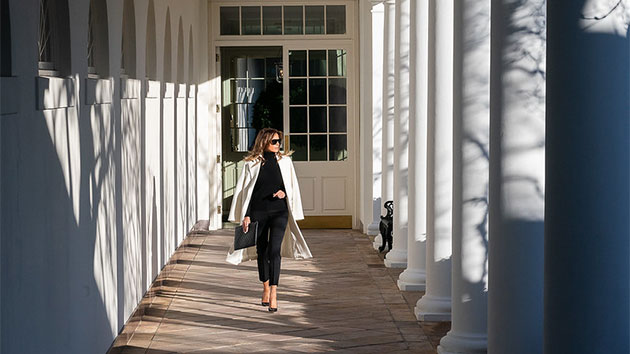 Official White House Photo by Andrea Hanks(BALTIMORE) — First lady Melania Trump was welcomed to the stage at an opioid awareness summit in Baltimore on Tuesday with some cheers, but also a loud chorus of boos that continued for almost a minute. It’s rare, if not unprecedented, for the first lady to get such a harsh reception at an event where she was appearing without her husband. It wasn’t clear why she was booed, but she delivered her remarks as prepared and didn’t appear to acknowledge the booing in any way.Her office didn’t immediately respond to an ABC News request for comment.The boos began as she greeted the more than 2,500 attendees of the B’More Youth Summit, held at the University of Maryland’s Baltimore campus. Not appearing to have been fazed by the booing, Melania began her remarks by thanking the students and other attendees for getting involved to fight the opioid crisis.Since declaring the opioid epidemic a public health emergency in March, the Trump administration has made it a priority to raise awareness. She talked about her “Be Best” initiative, focused on helping future generations and three main pillars: well-being, online safety and opioid abuse, according to her remarks.“I know each one of you has hopes and dreams for the future, whether it is college, joining the military, or playing a sport, your future will be determined by the choices you make,” she said. “Using drugs will only slow you down and prevent you from achieving those goals. I encourage you to use the resources available in your community so that nothing can stand in your way.”The boos died down somewhat while she spoke, but audience members could still be heard talking loudly, according to a pool report.The booing then continued as she walked off the stage.