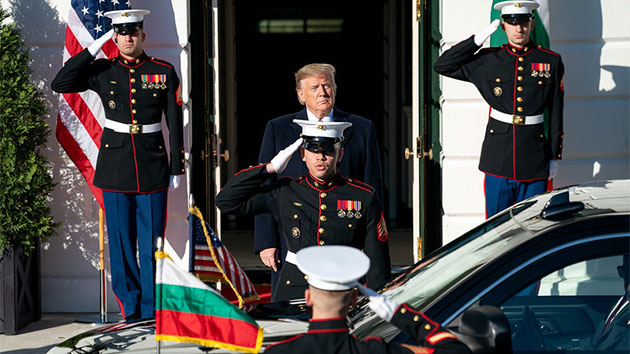 Official White House Photo by Tia Dufour(WASHINGTON) — White House Counselor Kellyanne Conway on Tuesday pushed back on an assertion made by now-ousted Navy Secretary Richard Spencer that the president doesn’t understand “the full definition of a war fighter.”Spencer was fired by Defense Secretary Mark Esper on Sunday for going behind his back, Esper said, in the handling of the war crimes case involving Navy SEAL Eddie Gallagher.In an interview with CBS News Monday that aired Tuesday, Spencer said that he doesn’t think President Donald Trump “really understands the full definition of a war fighter.””A war fighter is a profession of arms, and a profession of arms has standards that they have to be held to, and they hold themselves to,” Spencer said.Asked about Spencer’s comment, Conway told ABC News on Tuesday, “Well, we disagree with that. The president understands.””And the now fired secretary of the Navy didn’t express really that last week before he was fired,” Conway said. “So, I assume he was serving under this commander in chief because he had a great deal of faith in the president’s skills and his backing of — his support for our war fighters and other members of the military past and present … So that’s an unfortunate comment.” Gallagher, while acquitted of killing a wounded Islamic State captive earlier this year, was sentenced to four months of time served and a reduction in rank for posing with a corpse during a 2017 deployment to Iraq. Earlier this month, Trump restored Gallagher’s rank to E-7 (Chief Petty Officer) so that he could retire with full benefits.The Navy then decided to convene a Trident review board to determine whether Gallagher could keep his Trident pin, which signifies membership in the elite SEAL community. While the president initially tweeted last Thursday that the Navy “will NOT be taking away” the pin, the White House ultimately told the Navy that the review board could go forward.However, Esper said that during this time his Navy secretary was trying to cut a backroom deal with the White House that would have allowed Gallagher to retire with the Trident — a deal that he said he learned about only on Friday following a conversation with Trump at the White House.Ultimately, Gallagher will be allowed to retire as a Navy SEAL with his Trident pin, a directive issued by the president to his defense secretary over the weekend, Esper told reporters.

I will always protect our great warfighters. I’ve got your backs!

— Donald J. Trump (@realDonaldTrump) November 26, 2019 “I will always protect our great warfighters. I’ve got your backs!” Trump tweeted on Tuesday morning.Asked what message it sends to the troops that the Navy will not convene Gallagher’s review board, Spencer told CBS, “That you can get away with things. We have to have good order and discipline. It’s the backbone of what we do, and the Trident review process with the senior enlisted reviewing fellow senior enlisted is critical… They are the guarder of good order and discipline. They can handle this.”Navy leadership will decide whether a Trident review board for three SEALs who were part of Gallagher’s unit will still undergo that process, Esper said.Copyright © 2019, ABC Audio. All rights reserved.